9 Causes of Vaginal Bumps, According to Experts 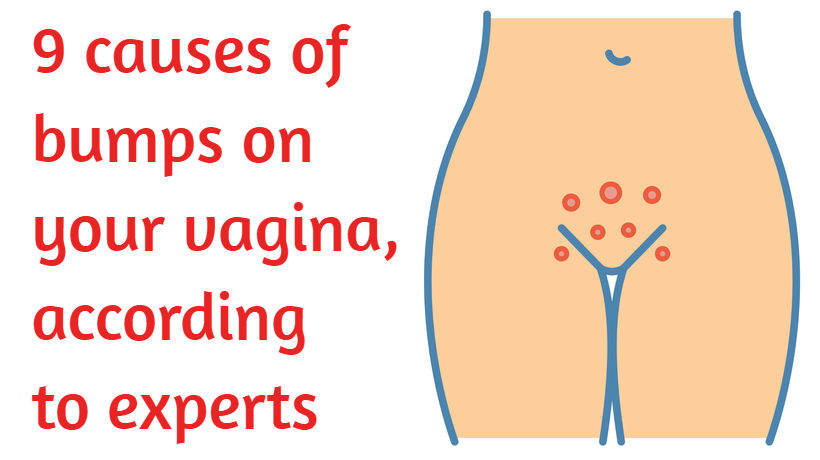 Bumps on your vaginal area can be alarming for anyone. Immediately, our minds jump to the scariest scenario. But before you get ahead of yourself, know that there are many potential causes behind that bump on your vulva that aren’t necessarily as dangerous as you would think. Just like the rest of our body, bumps can be quite harmless, like pimples and cysts.

“Women come into my office worried about genital bumps all the time, and many jump to the initial, horrible conclusion that they have cancer,” Alyssa Dweck, M.D.1, a gynecologist at New York’s Northern Westchester Hospital and coauthor of The Complete A to Z for Your V, told Self Magazine.

So then what is behind that mysterious bump? Read on to learn more!

Similar to acne on our face, we can develop breakouts on our vaginal area too.

“Same as anywhere else on the body, we may develop acne in the vaginal area as well,” said Carolyn DeLucia, MD, of VSPOT Medi SPA in New York City, to Women’s Health Mag.

These blemishes look like any other type of acne: red, irritated, and sometimes filled with pus. When they are pus filled, they will often appear white.

If you’re wondering if it’s safe to pop a vaginal pimple, experts say that it’s best to keep your hands away from the area. Popping the blemish can spread bacteria, which can result in an infection. Moreover, because vaginal skin is so sensitive, popping the pimple can easily irritate the area and make it much worse. DeLucia recommends just leaving the area alone.

“Vaginal acne usually resolves itself, as it does on the face,” explained DeLucia.

A common cause for bumps near the vaginal opening, Bartholin’s cysts are usually painless and harmless. These weird bumps happen when the Bartholin’s glands, located on either side of the vaginal opening, become blocked or infected, resulting in swelling. They are usually unnoticeable, and will go away on their own. But if the area becomes infected, the cyst can become large, painful, and filled with pus, in which case you should consult your doctor right away.

3. Your hair removal method is irritating your skin.

“Shaving, waxing, and whatnot can cause an infection in some of the small hair follicles around the vulva, which can create bumps and lumps,” Dweck said. This infection, known as folliculitis, can appear in the form of a razor burn or even a boil full of pus. Generally, these bumps will go away on their own, but it’s best to leave the area alone (meaning, no shaving or waxing) for at least a month to let the delicate skin heal. To help soothe the inflamed area, the American Academy of Dermatology recommends applying a warm compress to the area for at least 15 minutes, three to four times a day.

Because of their texture and curl, ingrown hairs are far more likely than other body hair to grow back into the skin, causing ingrown hairs. These bumps usually look firm, round, pus-filled, or blister-like. They’re usually painless, but can sometimes be itchy and uncomfortable.

Luckily, ingrown hairs will usually go away on their own. But if you notice that the annoying bumps aren’t going away, or if the area is becoming inflamed and infected, you should probably check in with your doctor.

5. You have a sebaceous cyst.

“Sebaceous cysts are benign, usually superficial lumps that can occur anywhere on the vulva and often show up as a bump on the labia,” Dweck explained. “They typically have a white hue, can be solitary or multiple, and often go away on their own.”

“They’re often found in the groin area,” explained Eve Espey, MD, professor and chair of the obstetrics and gynecology department at the University of New Mexico School of Medicine. “They can become infected, but the infection usually stays right in that area.”

Because they’re usually painless, people will often discover them while showering or changing their clothes. If you notice that the bump hasn’t disappeared after a few weeks, consult your doctor for further examination.

6. You have molluscum contagiosum.

“If you have molluscum, multiple little red bumps with a crater in the middle may appear [on the vulva],” Dweck said.

These bumps are caused by the molluscum contagiosum virus, a benign viral infection spread through skin-to-skin contact. Although doctors sometimes see this infection in children, it is largely spread by adults through sexual contact.

These bumps usually will disappear within a year without treatment, but if you’re looking to get rid of them sooner, consider seeing your doctor for help.

7. You have genital warts.

One of the most common types of sexually-transmitted infections, genital warts are caused by the human papillomavirus (HPV), and appear on the skin as small, flesh-colored bumps. In other cases, they can have a cauliflower-like appearance. But in many cases, these bumps can be so small that they’re barely noticeable.

8. You have genital herpes.

Although there’s a lot of stigma surrounding this condition, having genital herpes is not the end all be all. According to the CDC, more than one out of every six people aged 14 to 49 years old has genital herpes, making it one of the most common STI’s in the US. In most cases, genital herpes is asymptomatic, so many people may not even realize that they have this condition. But for those that do experience symptoms, genital herpes will usually appear in the form of irritating sores that resemble pimples.

One of the first signs of syphilis is one or more small, painless bumps at the site of the infection, which is usually the genitals or the mouth, explained David Diaz, MD, a reproductive endocrinologist at Orange Coast Memorial Medical Center in Fountain Valley, California. These bumps will usually linger for about three to six weeks before disappearing, but be wary﹘ just because the bumps are gone does not mean you’re syphilis-free, and you should still absolutely seek treatment. Without medical help, the condition can become life-threatening. Thankfully, syphilis is highly treatable today with antibiotics.