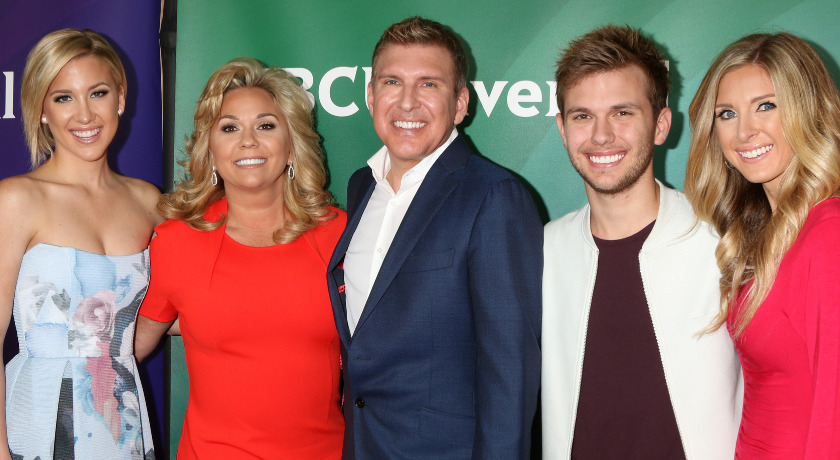 As of yesterday, Todd and Julie Chrisley are in custody of federal prison officials and have officially begun their prison sentences.

In November, the former reality TV stars were sentenced to 12 (Todd) and 7 years (Julie) in federal prison for tax evasion and bank fraud. Todd will serve his sentence at FPC Pensacola in Florida, while Julie–who was initially going to serve at FCI Marianna, Florida–will now serve at FMC Lexington, Kentucky.

The couple was denied bail on their final attempt last week.

Their children, who have been outspoken in the recent months leading up to Todd and Julie’s sentencing, bid their parents farewell via social media and podcasts.

Chase Chrisley, who was the last Chrisley kid to speak on the matter, posted to his Instagram story a Bible verse from Matthew 1:23 which read, “God is with us.”

Savannah Chrisley decided to discuss her parents’ sentencing on her most recent episode of her podcast, Unlocked, in which she compared their case with that of the Real Housewives of Salt Lake City star, Jen Shah, who was found guilty of conspiracy to commit wire fraud and sentenced to six and a half years in prison.

“Put the cases side by side, and it makes no sense — it just doesn’t,” she claimed. “There were hundreds of victims who were elderly, and people that provided statements that lost their homes, threatened to end their lives. There were so many different things, and she got six and a half years. Make that make sense!”

Amid their children speaking up, Todd also took to Instagram (in a post he later deleted) with a video of Karen Peck’s rendition of “Four Days Late”, in which she sings, “Lord, we don’t understand why You’ve waited so long, But His way is God’s way, not yours or mine, And isn’t it great, when He’s four days late, He’s still on time.”

“HE is always on time,” Todd captioned the video, “#fightthegoodfight”.

Savannah and her brother, Kyle, both commented on the post.

The Chrisley family attorney, Alex Little, feels “optimistic about the road ahead” following the couple’s sentencing.

“Todd and Julie are people of faith, and that faith gives them strength as they appeal their convictions,” he said in a statement. “Their trial was marred by serious and repeated errors, including the government lying to jurors about what taxes the couple paid.”

US attorney, Ryan K. Buchanan, also had a statement to E! News as the prosecutor in the case.

“Over the course of a decade, the defendants defrauded banks out of tens of millions of dollars while evading payment of their federal income taxes. Their lengthy sentences reflect the magnitude of their criminal scheme and should serve as a warning to others tempted to exploit our nation’s community banking system for unlawful personal gain.”

Todd and Julie maintain their stance on innocence and will continue to appeal the case.