Leo Season is Finally Here! Here’s How Your Love Life Will Be Affected Based on Your Zodiac Sign 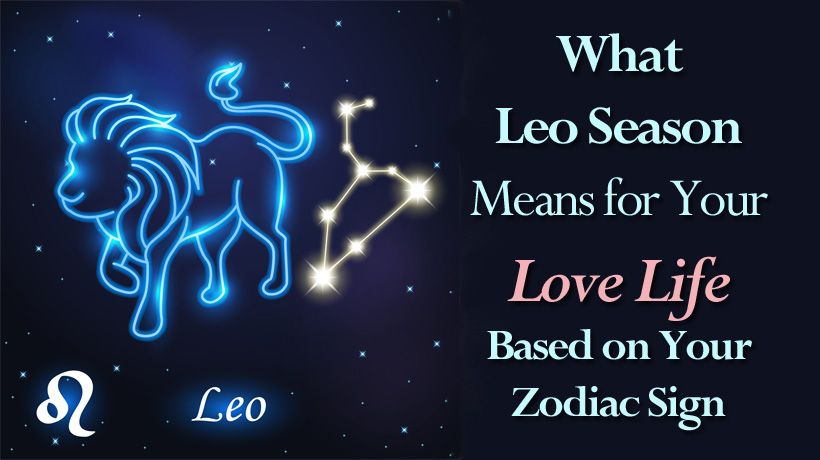 After an unnecessarily emotional Cancer season paired with Mercury retrograde, many of us have been desperately craving some relief from the constant barrage of waterworks, truth bombs, and unexpected travel mishaps we’ve had to deal with. Well, I’ve got some good news for you: Leo season has finally arrived, which means it’s time to toss caution to the wind and live our best, most extra lives.

When the sun moves into fiery Leo, it causes us to feel confident, carefree, romantic, and downright royal. Yes, Leo season is the time for treating yourself to anything (or anyone) your heart desires. Want to know if Leo season is going to spice up your love life or send it up in flames? Here’s what’s going to happen according to your zodiac sign.

Aries (March 21st – April 19th)
This fire sign is known for their independence and lack of emotion, but Leo season prompts them to get in touch with their feelings for once. If you’re an Aries, use Leo’s playful energy to go out and have some fun with that cutie you’ve been eyeing–and don’t be afraid to catch feelings! Leo season is all about following your heart.

Taurus (April 20th – May 20th)
Taurus can be a bit materialistic, and this sign loves to spend money they don’t have on things they don’t need. Since Leo season causes us to release our inhibitions, Taurus will be feeling the urge to spend money on luxury gifts for their partner or crush even more than usual. Just make sure you don’t send your account into the negative buying premium scented candles (because dollar candles just don’t set the mood right).

Gemini (May 21st – June 20th)
Air sign Gemini is a flirt by nature, meaning romantic Leo season is going to turn them into a full-on casanova. This Leo season, Gemini can expect to turn heads (and have their head turned) over and over again. Use your expert communication skills to dazzle that hottie at the bar…and their friend…and the bartender…and, well, you get it.

Cancer (June 21st – July 22nd)
Cancer may be the only sign who isn’t suffering an emotional hangover from the previous season. With the sun moving into Leo, Cancer’s has renewed spirit and confidence, making them finally ready to leave their house and find love. So wear that outfit you know you look good in, Cancer! You could be on the path to finding “the one.”

Leo (July 23rd – August 22nd)
It’s Leo’s season, so it goes without saying that this sign is in for a romance of grandeur. During this time, Leos’ natural charm and charisma will only be intensified, making them practically irresistible to anyone they come in contact with. Whether they’re the predator or the prey, finding a mate won’t be difficult for Leo this season.

Virgo (August 23rd – September 22nd)
When it comes to expressing their emotions, Virgos are best characterized by the phrase, “mum’s the word.” They’d rather show their partner or crush how they feel rather than tell them. But Leo season calls for free expression, and Virgo will finally have the words and confidence to express how they feel. So, don’t be shy, Virgo! Tell that special person how you feel.

Libra (September 23rd – October 22nd)
Libra is a sign that needs balance and harmony. With all of the romantic vibes Leo season puts into the air, Libra may start feeling the need to find a mate and settle down. However, don’t rush into this. Your indecisive nature could leave you regretting your commitment. Instead, try channeling your sudden need for love into a new friendship.

Scorpio (October 23rd – November 21st)
With Leo season affecting all matters of the heart, Scorpio’s passion and intensity will increase tenfold. This sign may feel the need to declare their love for their significant other to the world. Those who are single may experience an urge to couple up so strong that it feels like life-or-death. Either way, don’t hold it in. Leo season is all about doing it with heart, or not at all.

Sagittarius (November 22nd – December 21st )
Leo season is best defined as all play and no work, and many of us will feel the need to take a vacation. This is especially true for Sagittarius, who loves to travel and explore. This season, Sagittarius may be prompted to take a spontaneous trip with their lover, a rarity considering they (literally) love to fly solo.

Capricorn: (December 22nd – January 19th)
As one would expect, the “all play and no work” thing doesn’t really work for Capricorn. While other signs may feel empowered by this energy, earthly Capricorn will struggle in the whirlwind of distraction that is Leo season. This sign will need to set boundaries with their partners or friends this season in order to avoid feeling like others are getting in the way of their dreams or goals.

Aquarius (January 20th – February 18th)
Aquarians are known for their logic and open-mindedness, not their loving nature. In fact, this sign can sometimes be described as cold. Leo season may just warm up their heart a bit, allowing them to make a romantic connection and give their partner the love and affection they need.

Pisces (February 19th – March 20th)
Along with romance and confidence, Leo season brings us an abundance of creativity. This is great for artistic Pisces, who will be able to find unique and interesting ways to show their partner they love them this season. Those who are single may just feel the need to go out and find love rather than hoping it will come to them.