U.S. Capitol in Lockdown After Trump Supporters Breach the Building 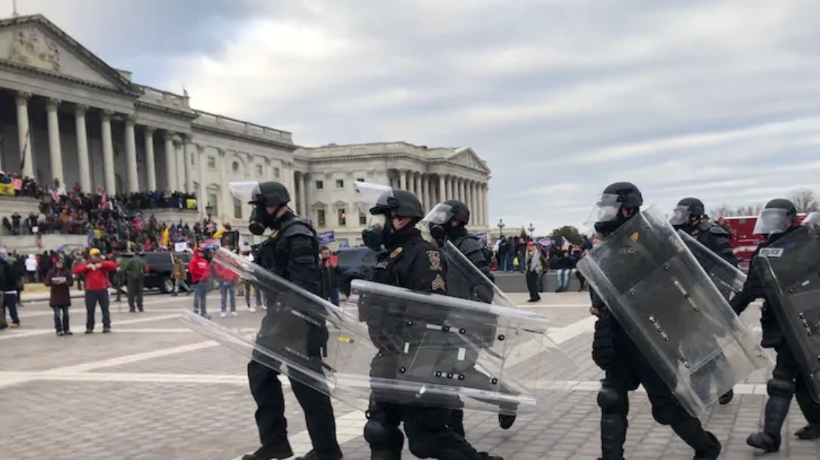 Thousands of President Trump’s supporters are in Washington for rallies Wednesday to falsely assert that the presidential election was stolen from him. The demonstrations turned violent as many in attendance saw them as a last stand for Trump on the same day that Congress votes to certify that President-elect Joe Biden won the election.

Trump — who lost the popular and electoral college vote — continues to dispute the results, without evidence, and has encouraged his supporters to attend the rallies. According to Washington Post, he took the stage about noon to roaring crowds, claiming he had won the election.

Shortly after 1 p.m. hundreds of pro-Trump protesters pushed through barriers set up along the perimeter of the Capitol, where they fought with officers in full riot gear, some calling the officers “traitors” for doing their jobs.

About 90 minutes later, police said demonstrators got into the building and the doors to the House and Senate were being locked. Shortly after, the House floor was evacuated by police.

Around 2 p.m., Capitol police sent out an alert:

All buildings within the Capitol Complex, Capitol: Due to an external security threat located on the West Front of the U.S. Capitol Building, no entry or exit is permitted at this time. You may move throughout the building(s) but stay away from exterior windows and doors. If you are outside, seek cover.

Both chambers abruptly went into recess amid the chaos.

Vice President Mike Pence was also evacuated from Capitol, where he was to perform his role in the counting of electoral votes.

The stunning display of insurrection was the first time the US Capitol had been breached since the British attacked and burned the building in August of 1814, during the War of 1812, according to Samuel Holliday, director of scholarship and operations with the US Capitol Historical Society.

Shortly after 3 p.m., a shooting was reported inside the Capitol as the situation escalated.

“The D.C. Guard has been mobilized to provide support to federal law enforcement in the District,” said Jonathan Hoffman, the chief Pentagon spokesman. “Acting Secretary Miller has been in contact with Congressional leadership, and Secretary McCarthy has been working with the D.C. government. The law enforcement response will be led by the Department of Justice.”

Trump finally called on his supporters to “go home” hours after the riot started, but spent a large amount of time in the one-minute video lamenting and lying about his election loss. In one stunning line, Trump told the mob to “go home,” but added, “We love you.

You are very special.”Trump struck a sympathetic tone to the rioters he himself unleashed saying, “I know your pain, I know you’re hurt. We had an election that was stolen from us. It was a landslide election and everyone knows it. Especially the other side. But you have to go home now. We have to have peace.”

Metro will shut down transit service early on Wednesday because of the violence at the U.S. Capitol and a 6 p.m. curfew instituted by D.C. leaders.

The transit agency said in a statement it is moving up closing times throughout the region “in the interest of public safety.”