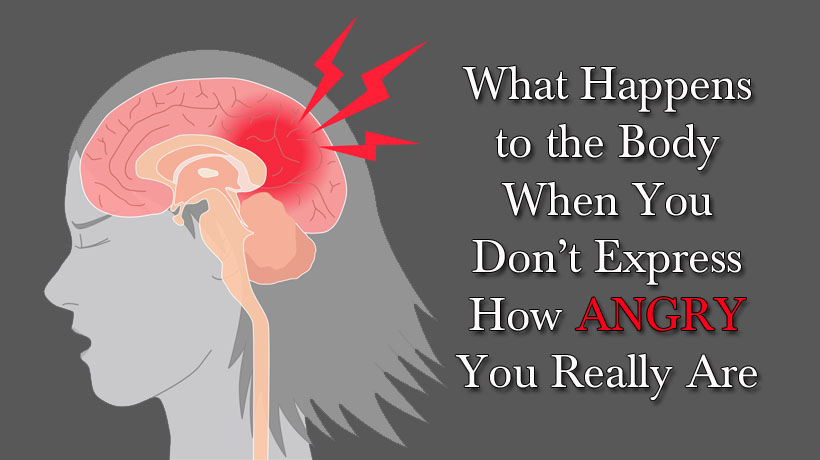 Anger is explosive and scary when it takes over, and it can lead to you wanting to suppress it to remain in control and calm. However, suppressing it in an unhealthy way—like trying to deny or ignore it—will cause problems to your body and increase your risk for cardiovascular diseases. Here are six things that happen to your body when you suppress your anger.

Your coronary heart disease risk rises
Suppressing your anger taxes your heart and raises your risk for Coronary Heart Disease. According to Unhealthy Work, a nonprofit that raises awareness about the link between psychological issues and cardiovascular health, “Anger is also associated with increased rates of testosterone production and platelet formation, which are also involved in the pathogenesis of CHD (Coronary Heart Disease).” This happens because you’re not allowing your body to get rid of the anger, and it lingers, keeping you in a tense state. This tension puts strain on your arteries and weakens them.

Your stroke risk increases
Bottling up anger makes your stroke risk increase, because your arteries are more susceptible to narrowing when you’re angry, especially if you already have clogged arteries. Your unvented anger could reduce blood flow to your brain. According to a study published in the journal Stroke, “Expressions of hostility or anger that are deviations from normal in either direction may be related to adverse cardiovascular consequences.”

Your immune system weakens
When you keep anger inside and don’t release it, it remains in your brain, telling your immune system to reduce bodily protection. When we’re angry, our bodies enter a “fight or flight” state, with healing and bacterial protection taking a backseat. According to a study published in the journal Frontiers in Behavioral Neuroscience, “Hostile marital relationships are associated with slower wound healing and dysregulated cytokine production at wound sites.”

Your depression will get worse
Bottling anger makes your depression worse, because not venting your emotions makes you ruminate on them and turn that anger on yourself. According to Lisa Firestone, Ph.D for Psychology Today, “Maladaptive anger, on the other hand, affects us negatively…it can contribute to feeling victimized, sulky, or stuck in a feeling of being wronged.” Your suppressed anger will also feed any stress and anxiety you feel.

Your lung capacity lowers
When you get angry, your body works faster in its “fight or flight” state to deal with a threat. You breathe faster and shorter, your heart rate jumps, and you feel hot. Suppressing anger can hurt your lungs and cause them to decrease air capacity because your body remains in its “threat” stage which affects your breathing. According to a study published in the journal Thorax, “Higher levels of hostility were associated with both lower levels of pulmonary function at baseline and also with a faster rate of decline in lung function over time.”

Your blood pressure spikes
Anger makes you feel hot, and it jumpstarts your heart rate due to a rise in blood pressure. If you’re in a chronic state of anger due to suppression, your blood pressure level will spike and remain high until your release your emotion. According to Harry Mills, Ph.D of MentalHelp.net, an online resource from a subsidiary of American Addiction Centers, Inc, “High blood pressure (Hypertension), and blood pressure reactivity are also related to the expression of anger and hostility.”