What to Expect This Month Based on Your Zodiac Sign 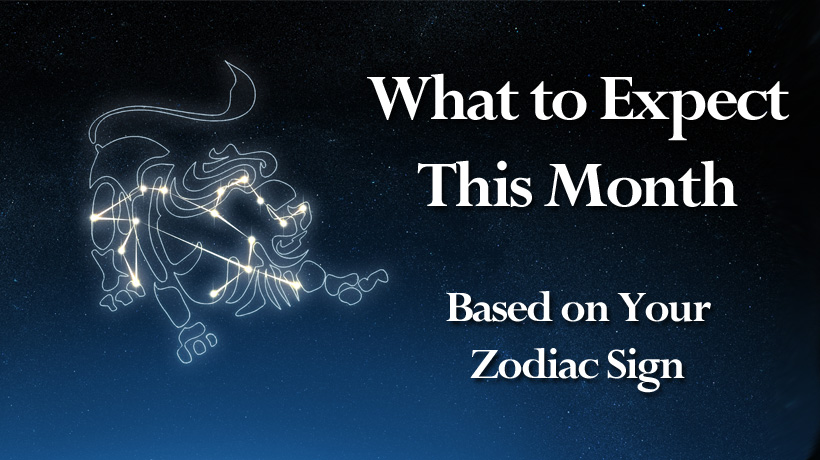 With August comes the beginning of the end of summer, meaning we’re all frantically trying to fit in one last sun-filled beach day or spontaneous road trip before the upcoming seasons force us back inside. But even though we’re sad to see summer go, it kind of feels like that last Sunday before the first day of school. Yes, you’re dreading all of the work and menial tasks you know you’ll have to do, but there’s a tinge of excitement in your stomach as you think about all of the unforeseen opportunities that are in store.

August will be a time for emotional awakenings and new opportunities, with New Moons occurring on August 1st (or July 31st, depending on your time zone) and August 30th, and a full moon occurring on the 15th. Want to know what the universe has planned for the end of your summer? Here’s what to expect this month based on your zodiac sign.

Aries (March 21st – April 19th)
Coming out of Mercury retrograde and going into Leo season, Aries will feel renewed vigor in their ability to take charge in all things. For once, you’ll truly know what’s best for yourself (instead of just thinking you do). But mid-August may bring some relationship challenges and temper flares, with the full moon in Aquarius causing you to lose control of some of your emotions.

Taurus (April 20th – May 20th)
Taurus hates change, and with Uranus, the planet of change and revolution, currently in your sign, you’ve probably been experiencing some turbulent times lately. But as Uranus goes retrograde mid-August, you’ll feel relief from the pressure and have time to reflect on all the recent changes. Try paying extra attention to how the way you express yourself could be causing conflict with others.

Gemini (May 21st – June 20th)
Air sign Gemini will really feel Leo’s playful energy in the month of August and will struggle between having fun and handling their responsibilities. But the full moon in Aquarius will prompt a period of inner reflection, and allow Gemini to explore their intellectual side. You may feel the urge to learn all you can about a new topic and share that information with others.

Cancer (June 21st – July 22nd)
Coming out of what was a particularly intuitive and emotional season for you, Cancer will feel refreshed and ready to delve into their life’s ambitions in August. The New Moon in Leo will give you the courage to implement the new lessons you may have learned during eclipse season. You may also see success in your career and finances around the time of the mid-August full moon.

Leo (July 23rd – August 22nd)
It’s your birthday month, Leo! Now is the time where you will feel most in touch with yourself, so make sure to take a closer look at what you want or will make you happy. The spotlight on you will also shine even brighter than usual during your season, so go out and have a blast, and let people soak up all of your charisma, beauty, and charm! Just make sure you don’t get too wrapped up in your ego, or you’ll push others away.

Virgo (August 23rd – September 22nd)
Since Virgos are ruled by Mercury, Mercury retrograde was an especially difficult time for them, as it hindered their ability to communicate properly. With August comes the dissipation of that restrictive energy, and Virgo will relish in their ability to finally express themselves. The New Moon in Leo will bring fresh inspiration and creativity to Virgo, allowing them to make new friends, try new things, and excel at work.

Libra (September 23rd – October 22nd)
The New Moon will cause Libra to be in good spirits at the beginning of August. The good Leo vibes will leave you feeling chatty, energized, and ready to party with friends. But you may see a change in your mood during the full moon. Try not to let your anger cause you to say things you don’t mean.

Scorpio (October 23rd – November 21st)
During eclipse season, Scorpio may have felt deeply in tune with their emotions, and possibly discovered a thing or two about themselves. The New Moon will give them the energy they need to begin working on new projects that inspire them or finish up ones they’ve already started. However, you’ll need to avoid getting too emotionally invested in what others think during the time of the full moon, as you could be quick to react.

Sagittarius (November 22nd – December 21st)
Sagittarius will see themselves most affected by Leo season’s energy this month, with stronger urges to travel and be unapologetically honest. They may even feel a bit rebellious and desire to cause some trouble. Just be sure to watch your mouth this season, Sagittarius. You’re already known for your blunt statements, but the full moon energy may push you to another level.

Capricorn (December 22nd – January 19th)
While others are using this Leo season energy to call upon their inner child for some play, Capricorn will use this energy to get back to business. The New Moon will give them the ability to set intentions for their life and career going forward, while the full moon will see all their hard work come to fruition. Yes, this is a great time for you career-wise, Capricorn, but make sure you take the time to rest and relax as well.

Aquarius (January 20th – February 18th)
Unemotional Aquarius absolutely hated Cancer season and is feeling a little more like themselves now. The Leo New Moon will allow Aquarius to focus their attention back on themselves and their future, giving them the confidence to figure out what’s best for them instead of following the pack. The full moon in their sign will also allow them to not only express themselves but understand the emotions of others better.

Pisces (February 19th – March 20th)
The emotional Cancer and eclipse season left water sign Pisces reeling, and they’ll probably need to use the beginning of August to decompress. However, things may not get easier for Pisces until later in the year. As a sign ruled by Neptune, the planet of illusion and fantasy, Pisces are dreamers. Neptune has been retrograde in Pisces since the end of June, meaning Pisces has been (and will continue to be) experiencing some serious spiritual development. This has come in the form of shattered illusions of themselves and others since Pisces typically only sees their idealized version of things.