10 Habits of Someone Hiding Their Depression 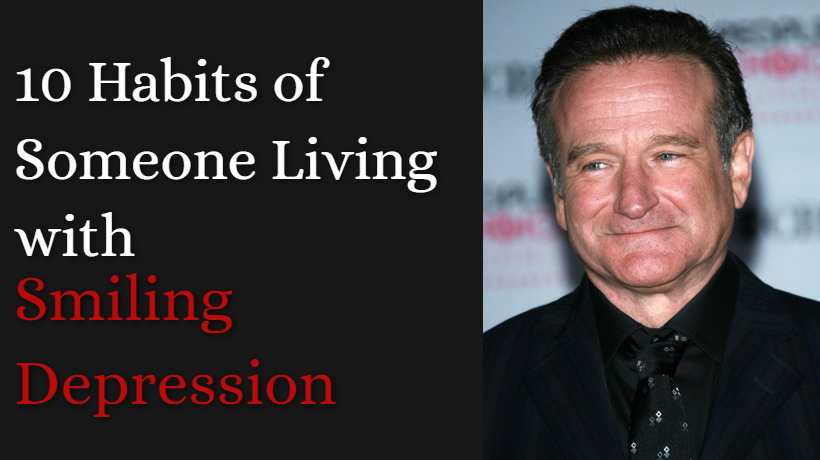 Depression can be a hard subject to discuss. It’s hard to diagnose without professional help but even harder to start the conversation that should lead there. Different people deal with depression in different ways, sometimes we have a hard time telling if someone is at all.

Smiling depression is a term to describe someone living with depression on the inside, even though they may appear happy or content. On the outside, they may seem put together and okay; but internally, they are struggling and distressed.

Here are a few warning signs that doctors say could be the key to finding out if someone is covering their depressive feelings.

As with many other illnesses, people with suspected depression often end up with unusual eating schedules. According to Dr. John Grohol, Psy.D., overeating can help a person who is depressed feel full and less emotionally empty inside. Licensed Counselor and Psychotherapist Jayne Leonard says these habits can be due to a change in appetite and can lead to extreme weight loss or gain.

Leonard says there is a strong connection between mood and sleep. Lack of sleep can contribute to depression while depression can also make it hard to sleep. “Sleep is the foundation of both good health and mental health,” Dr. Grohol says. “When a person can’t sleep (or sleeps for far too long) every day, that may be a sign of hidden depression.”

People with depression usually have an excuse as to why they can’t hang out, come to dinner, or make it to certain events. Dr. Grohol says this is because they typically don’t like to spend more time with other people than they have to. Sometimes you can catch a hint of someone’s mood but it can be hard to pinpoint depression as the reason someone doesn’t want to make any plans.

4. Excessive Alcohol or Drug Use

Increased drug or alcohol use can be a big sign that something is wrong. Grohol and Leonard both say that they can be used as coping mechanisms for feelings of loneliness, sadness, or hopelessness that accompany depression. The same applies to a person who has never used drugs or alcohol before in their life.

A person with depression may show signs by the way they start to talk. According to Dr. Grohol, conversations may shift to things they never really talked about before. “These might include the meaning of life, or what their life has amounted to so far,” Grohol says. He also says that depending on the situation, they may open up about wanting to hurt themselves. On the opposite side, they make speak about wanting to find happiness or a better life for themselves.

Leonard and Grohol both say that people with depression may wear their happiness like a mask. Leonard says that hidden depression is often called “smiling depression” because people who hide their symptoms put on a “happy face” in front of others. For some, it can be hard to keep up with false happiness or even force themselves to be happy in the first place.

Tied to pessimism, it is said that people with depression often have “depressive realism”. From previous research, Grohol and Leonard explain it as them having a “more realistic” view of their life and the world around them. In addition, people with depression may experience increased anger and irritability. In a few cases, it may replace feelings of sadness.

For a person with depressive feelings, it can be hard to keep it hidden for long. They may give up the fight to conceal their true feelings and tell someone. “They may even take the first step and make an appointment with a doctor or therapist,” Dr. Grohol says. But once they sit and think about what they said, they realize they didn’t really want to share that much and may retract their statements.

9. Disinterest in Past Hobbies

Disinterest in past hobbies or loss of concentration is one of the first signs people can use to see if their loved ones are depressed. “When a person trails off during conversations or loses their train of thought, it can indicate issues with memory and concentration, which is a common symptom of depression,” Leonard says. This could possibly be a way to catch and address the symptoms early.

Though this might be shocking, Leonard says depression and its mood swings can often impact a person’s sex drive. A list of reasons why people with depression may experience this included loss of interest in pleasurable activities such as sex, fatigue/low energy levels, and low self-esteem.