10 Non-Verbal Cues You're Being Deceived 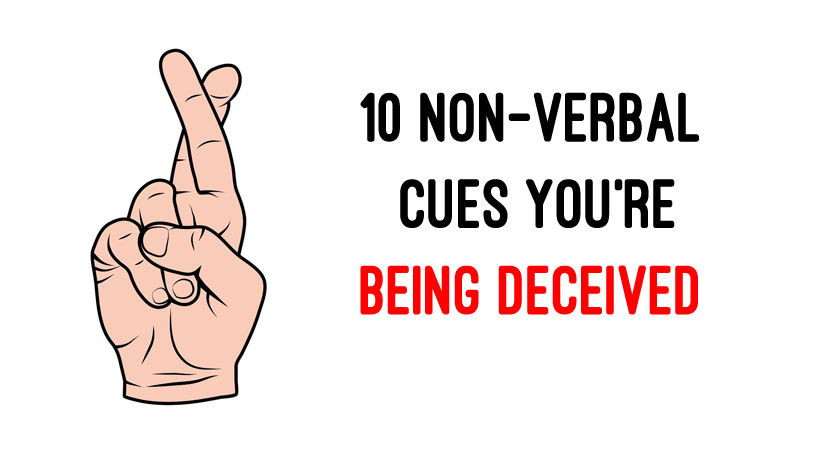 It’s easy to spot classic verbal signs of lying, but do you think you could detect deception through body language? Here are 10 ways you can separate a liar from the rest, and you might be surprised at how common they are.

Refusal to make eye contact
When someone is lying to you, they often find it hard to see your reaction, which causes them to look away from you. This is a classic sign of deception, as it clearly reveals one’s vulnerability.

Too much eye contact
On the other hand, liars who are aware that their lack of eye contact will give them away tend to overcompensate. Therefore, a deceiving claim might be followed by unnatural eye contact as a method to persuade you.

Antsy body language
Any constant movement of the hands, feet and arms indicate a person’s fear, which is a great way to catch someone in a lie. They’ll find it hard to keep still because as they lie, their anxiety raises tremendously.

Excessive throat clearing
During the midst of a lie, your throat tends to get very dry due to nerves. If someone is constantly clearing his or her throat, it’s likely that you are not being told the truth.

They cross their arms over their chest
In order to create distance and a sense of protection, a liar will use their arms as a way to be defensive. Watch out for similar signs such as placing an object in between you two in order to simulate a barrier.

Covering of the face
Only someone who is extremely nervous or ashamed would cover his or her face while telling you something. Pay close attention to this body language – you don’t want to be deceived, but you also don’t want to misjudge someone who is simply very shy.

Heavy breathing
A change in one’s breathing patterns, especially a shift towards very heavy breathing, is a clear sign of nerves. Breathing acts as a way to calm someone down, and this is true of someone who is telling a serious lie.

Playing with hair
This is another nervous tick that is sure to catch someone in the act of deception. A person who plays with their hair when speaking to you is either telling a vulnerable secret or … lying. Watch how a person’s demeanor changes when they begin to tell you something serious.

Fake smiles
It’s pretty clear that a fake smile is the perfect way to prove that someone is disingenuous. If they can’t hold an honest expression, it’s likely that whatever is coming out of their mouth is just as fake.