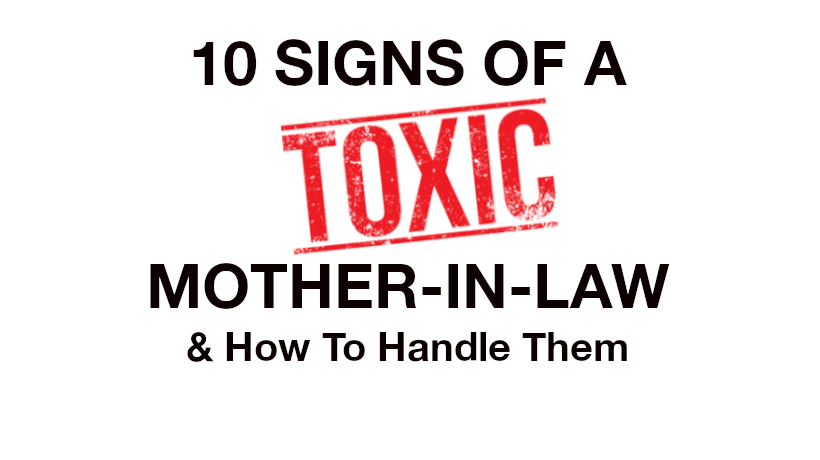 There is a well-known trope known as the evil mother-in-law who hates you for no apparent reason. While this may be a popular trope, some daughters-in-law are living the reality. Dealing with a monster-in-law can be emotionally and mentally defeating, but it is possible. Read on to see the signs of a toxic mother-in-law and tips on how to deal with them.

10 signs you have a toxic mother-in-law:

She crosses your boundaries

With any person (not just a mother-in-law) it is important to set healthy boundaries so you do not get mentally or emotionally drained. However, a toxic mother-in-law will cross your boundary and not even care that she did it — even when you made it crystal clear to her.

Dr. Bethany Cook, a clinical psychologist and author, says “This toxic tactic is designed to set up a power struggle—one that your spouse will likely be roped into at some point as well.”

She will constantly offer unwanted advice

This may seem nice, but if your mother-in-law constantly dishes out unwanted advice, you have a toxic mother-in-law on your hands.

Cook states, “There’s a good chance that your MIL is creeping into the toxic territory by trying to insert herself into the intimate dyad of a couple’s relationship.”

She shows up unannounced

Unless she is rooted in the culture from which she hails and this is considered acceptable (see Chinese culture), she should not be showing up to your house unannounced. This is simply rude and quite possibly problematic.

Dr. Cook explains, “[A] mother-in-law will do this as a way to control situations and make sure she is the center of attention and everyone’s life revolves around her and her needs.”

She gives gifts with conditions

Gift giving is nice when there are no strings attached and is purely from the heart. You know this isn’t the case when dealing with toxic mothers-in-law. This can come in many forms i.e.when she buys you a gift and it isn’t proudly displayed somewhere around your house.

“Giving something as a gift and expecting someone to use it is a toxic and more subtle form of manipulation. She is trying to change the person her child married,” Dr. Cook says.

She always has to be right

It’s either her way or the highway. The toxic mother-in-law will try to have an argument (usually trivial) with you and force everyone around her to think that she is right and the daughter-in-law is wrong.

Cook explains, “The end result is the couple’s relationship needs being put on the back burner to satisfy MIL.”

She pretends you’re not there

Cook notes, “ignoring someone is a form of psychological abuse as the perpetrator is using silence to demean the victim—a method that’s particularly hard to confront.”

She’s a “Different Person” when your spouse is not around

When your mother-in-law is in the presence of her child, she can seem like the nicest person in the world. Things change, however, when it’s just the two of you.

Cook notes that the idea behind this is to drive “a wedge between you and your spouse [that can make] you look like a liar and instantly cause trust issues.”

How to deal with a toxic mother-in-law:

View it with a calm mind

Sit with yourself and view the situation from a calm mind instead of right after a heated argument. Yvonne K. Fulbright Ph.D., MSEd says, “This will enable you to constructively take on the situation, coming from a more rational space when moving forward.”

I know that this advice is out of the left-field, but try to see where your mother-in-law is coming from. Maybe she is fighting a bigger issue and is taking them out on you unknowingly.

Fulbright says, “In some cases, a mother-in-law’s hostility may be an act of frustration over being disconnected from him. Consider, too, if she’s struggling with feelings of having been dethroned in her family, and if there are ways you can make her feel important and needed in her way.”

Talk to your spouse

Your spouse may not even be aware of what is going on. Do not place blame or wag a finger at your MIL, but rather just be honest about the relationship. Cook notes that the conversation should end with mutual understanding — “strength and support when talking to your MIL.”

Be okay with not getting their approval

It can be incredibly empowering if you do not let your mother-in-law get to you. Fulbright says, “Don’t drive yourself crazy trying to get your in-laws’ thumbs-up.” Not everyone will like you and that’s okay

If the bond is not there, it isn’t there. If you are dealing with a toxic mother-in-law or even a father-in-law, Fulbright notes that using the terms “Dad” and “Mother” gives them the power. Try calling your in-laws by their first names.

When you are communicating with a toxic mother-in-law, you have to be assertive. If you are timid and shy, they will walk all over you.

Fulbright explains, “While initial attempts to engage your in-laws should be courteous, the problem with being too polite for fear of coming across as rude or pushy is that you don’t establish necessary boundaries.”

Don’t Stoop to Her Level

Take the high road. Don’t stoop to her level because that is exactly what she wants. She may even be able to use it against you. Fulbright recommends, “no matter how heated you are, stick with the facts.”

When all else fails, the easiest thing to do is to limit contact. Although you cannot completely cut her out of your life (unless your spouse has a bad relationship with their mother as well), you can put a limit on the abuse.

Fulbright says, “If you are being disrespected and mistreated by your in-laws, then they aren’t entitled to the privileges that come with being in that circle. You have every right to draw and maintain strong boundaries in protecting yourself and your marriage.