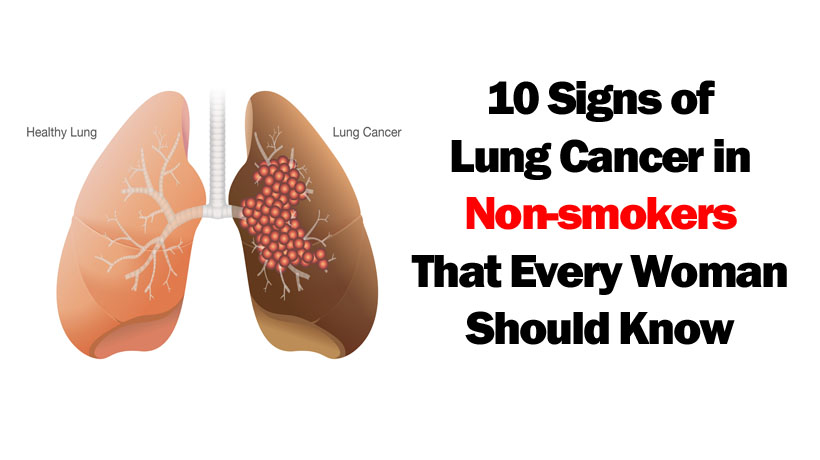 Lung cancer is the leading cause of cancer deaths for women in the United States. The disease accounts for almost twice as many deaths as breast cancer. Recent studies suggest that estrogen may promote the growth of lung tumors, which may account for the earlier age of lung cancer diagnosis in women than in men.

There are differences between the way men and women develop lung cancer as well as their response to treatment. Though often overlooked in broad overviews, these distinctions are important to note when the disease is discussed.

Why might a non-smoker get lung cancer? Doctors cite exposure to radon (an odorless gas found in homes), air pollution, secondhand smoke and environmental hazards (i.e. asbestos) as the most common sources.

Even if you’ve never held a cigarette before, check out these signs and symptoms of lung cancer that every woman should know.

Chest pain
A common sign of lung cancer is chest pain that is often exacerbated by deep breathing, coughing or laughing.

A lingering cough
If you have a dry cough that’s been around for over a month, it’s worth getting checked out, especially if there’s blood.

Chronic infections
According to the American Cancer Society, repeated illnesses in the chest can be a sign of lung cancer. Be wary of cases of infections such as bronchitis and pneumonia that do not go away or keep coming back.

Weight loss
One common symptom of most cancers is an unexpected or unexplained drop in weight.

Bone pain
If lung cancer has spread to other organs in your body, you may feel an ache deep down in your bones or joints. Common sites of soreness include the back and hips.

Overwhelming fatigue
A large majority of cancer patients report excessive tiredness as a symptom of their disease.

Muscle weakness
Along with your organs, lung cancer can affect your muscles as well. If you notice muscle weakness, consult a medical professional.

High calcium levels
Some lung cancers upset the balance of the body and can raise levels of calcium in the bloodstream. Symptoms of high calcium levels include frequent urination, excessive thirst, constipation, nausea, belly pain and dizziness.

Women are more likely to survive lung cancer at all stages of the disease; female patients have historically responded to a few chemotherapy medications used for lung cancer better than men. For both sexes, early identification and treatment are paramount.

Though most of these symptoms are more likely to be caused by other factors, it’s important to consult a medical professional so the cause can be found and treated if need be.