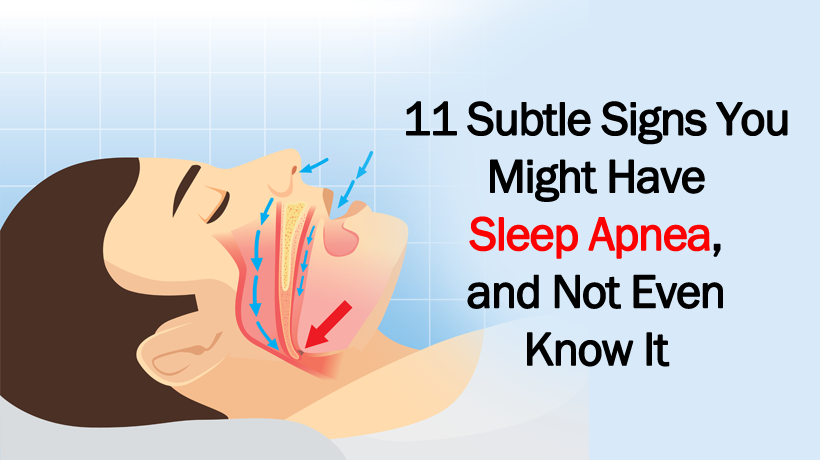 Sleep apnea is a potentially serious sleep disorder in which breathing repeatedly stops and starts. The condition affects approximately 20 million adults in the U.S., with an estimated 80 percent of cases going undiagnosed.

Because the condition acts up at night while you’re unconscious, many people with sleep apnea are unaware that they have the disorder. This is a problem because complications can be severe, putting you at higher risk for dangerous conditions like high blood pressure or heart problems, Type 2 diabetes, metabolic syndrome and liver problems.

To learn more about sleep apnea, look through these subtle signs to determine if you might have the disorder, and not even realize it!

Snoring
Loud, chronic snoring is one of the most common symptoms of sleep apnea. Snoring is the sound produced by vibrations in the upper respiratory airways during sleep. It’s caused by partial blockage of air that’s been restricted from moving easily through the airways.

Difficulties breathing
Choking or gasping for air while fast asleep is one of the key characteristics of sleep apnea. Because you’re fast asleep, you might not be aware that cessation of breathing keeps happening. For that reason, sleep apnea often goes undiagnosed until someone else witnesses another’s pauses in breathing.

Abrupt awakenings
Many people with sleep apnea report waking up suddenly, accompanied by uncomfortable shortness of breath. Related to other difficulties breathing, you might wake up in a panic, gasping for air.

Dry mouth and throat
Dry mouth and sore throat can be caused by sleeping with your mouth open. One reason someone with sleep apnea would do this is because they’re having trouble getting enough air, and need to breathe through the mouth to compensate.

Headache
Headaches are commonly reported by people with sleep apnea. That’s because as you stop breathing enough during the night, less oxygen makes its way to the brain. These low levels of O2 can cause seriously painful headaches in the morning.

Insomnia
Someone with sleep apnea might experience difficulty staying asleep or sleeping restlessly when they’re finally able to rest for long periods of time.

Attention deficit
Like fatigue, as a result of inadequate shut-eye, people with sleep apnea might have attention problems and poor concentration on a day-to-day basis.

Mood problems
A lack of quality sleep can severely affect a person’s mood. Losing sleep puts you at risk of feeling irritable, anxious and/or depressed.

Hypertension
Hypertension is commonly linked to sleep apnea. For the same reasons you feel headaches due to poor sleep, you can get high blood pressure as well. When the brain doesn’t receive adequate oxygen levels, it can cause a spike in blood pressure. That’s because as the lack of oxygen restricts your blood vessels, the body’s response is to kickstart your system into working again—sometimes, too drastically.

Obesity
People who are overweight are more likely to have sleep apnea. The disorder is often caused by excess fatty tissues that build up in the neck and throat and obstruct the airways as a result. If you’re a woman with a neck circumference greater than 16 inches, you are at a higher risk of sleep apnea due to fatty tissue buildup on the airways.

If you or someone you love might have sleep apnea, it’s important to see a doctor. Treatment can lessen the symptoms and may help prevent more severe health complications.