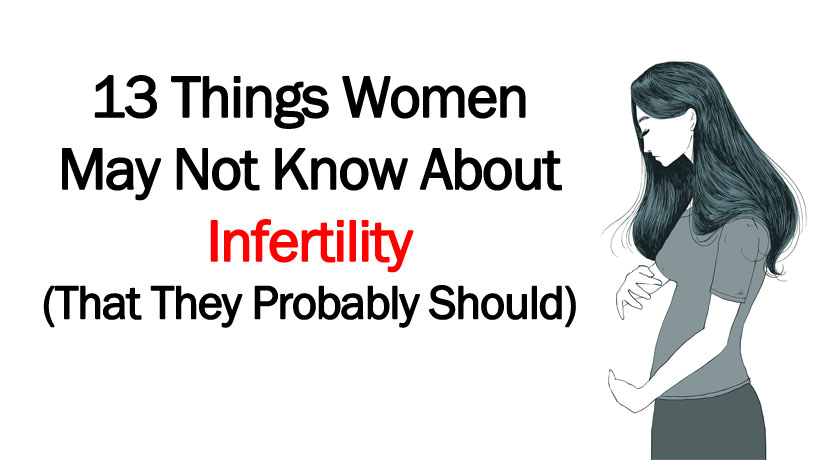 The Centers for Disease Control and Prevention state that someone is “infertile” if they are unable to conceive after a year of trying for a child.

And even though 10 to 15 percent of couples in the United States are infertile, most people still have very limited knowledge on the topic.

Greater knowledge about fertility health issues can help women better understand their bodies and hopefully conceive (if that’s the end goal). In fact, better comprehension may even help prevent infertility in the first place. To tackle the problem head-on, we’ve compiled a list of things women may not know about infertility that are worth knowing. These facts will provide an overview, causes, risk factors, prevention and diagnoses.

So without further ado, here’s what you should know:

Conception doesn’t always happen within the first year of trying
A fertile couple only has about a 20 percent chance of getting pregnant per month. This means that it’s totally normal to be unsuccessful for a while, and not always a sign that something is “wrong.” Not conceiving in the first year of trying (the accepted definition of infertility by the CDC) doesn’t necessarily mean you’ll never conceive. For some people, it just takes a little longer to become pregnant.

It could be a problem with ovulation
About 25 percent of all infertility issues are caused by ovulation challenges. These can consist of a number of things, including getting the ovulation timing wrong, having irregular cycles or facing a more severe issue. Ovulation disorders affect the release of eggs from the ovaries. These can include hormonal disorders, hyperprolactinemia and hyper-/hypothyroidism.

Age is one of the biggest influences on fertility
A woman’s fertility is expected to end roughly five to ten years before you hit menopause. After around age 35, the number of eggs you have, and the health of those eggs, starts to decline significantly.

Smoking kills… your fertility
In fact, it’s estimated that up to 13 percent of infertility cases are caused by smoking. That’s because women who smoke go through menopause roughly four years earlier than women who refrain from the habit. Infertility rates among smokers are evaluated to be twice as great as among nonsmokers.

There are a number of health conditions that make it harder to conceive
Being overweight or underweight, infrequent and inconsistent periods, endometriosis, polycystic ovarian syndrome (PCOS), uterine fibroids and endocrine disorders can all have an effect on your fertility. Fixing the original issue can often solve the resulting problem.

Beware of STDs
Chlamydia and gonorrhea can cause damage to your fallopian tubes, which can make it harder to get pregnant.

A healthy lifestyle is a must
Exercising, getting enough sleep, and making lifestyle choices that lower your stress levels can increase your fertility. Eating better can do the same: A lack of folic acid, iron, zinc and vitamin B12 can make it more difficult to get pregnant.

Avoid weights both too high or too low
Weight plays a major role in your fertility. Being over- or underweight can cause issues with conception. In fact, obesity and eating disorders are some of the most common causes of preventable infertility. Ovulation will usually resume after a normal weight is reached.

It could be a hormonal balance
If you have a hormonal balance, it’s possible that ovulation is irregular. Additionally, an underactive thyroid can also affect fertility. The thyroid gland affects the estrogen in the body, disrupting the cycles and making it difficult to conceive.

Radiation treatments are worth it, but can sometimes cause harm
Certain cancers—especially female reproductive cancers—can severely impair fertility. That’s because both radiation and chemotherapy can mess with the body. If you or your partner has gone through cancer treatments, especially radiation therapy that was near the reproductive organs, you’re at a higher risk of infertility.

You might have uterine or cervical abnormalities
Problems with the uterus or cervix, including abnormalities with its openings, polyps in the uterus, uterine fibroids or an irregular shape of the uterus, can affect your fertility.

Exposure to chemicals is dangerous for more reasons than one
Of course, it’s never good to expose yourself to harsh chemicals. But some pesticides, herbicides, metals and solvents have also been linked to fertility problems. Avoid these chemicals whenever possible.