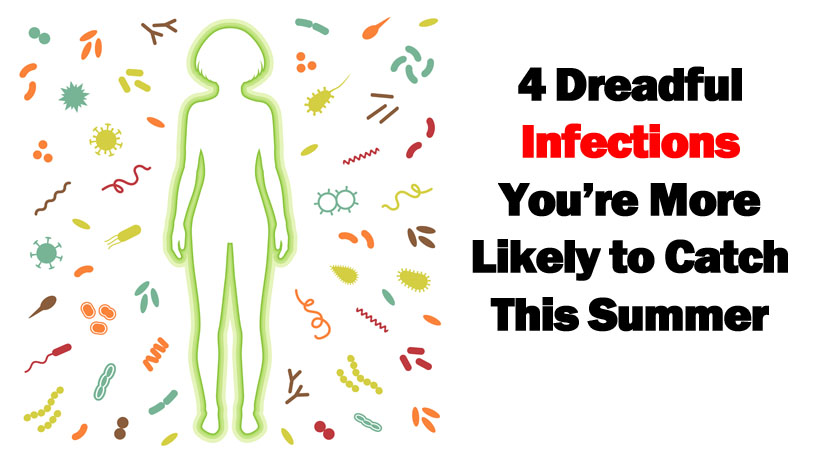 There’s a lot to love about the summer: the warm weather, the extra hours of sunlight and the perfect excuse for an ice cream treat (“I don’t want to eat this ice cream, but I must because it’s so hot outside”). But there’s one downside to all this—OK, maybe two if you view the daily dosage of dessert as a problem.

The continuous heat can be the perfect breeding ground for an abundance of bacterial and viral infections. Transmitted by insects, food, water and sometimes even through the air, some bacteria and viruses thrive under the summer sun.

Although these bacterial and viral infections can occur at any time in the year, the following illnesses run rampant in the summer months.

Mosquito-borne and tick-borne illnesses
Commonly caused by the arboviruses it carries, the mosquito brings about infections that can lead to West Nile encephalitis, St. Louis encephalitis and dengue fever. These illnesses are more common in the summer, specifically late summer and early autumn. Like mosquitos, ticks carry illnesses that include Lyme disease, Rocky Mountain Spotted Fever and ehrlichiosis. These are also more common during the summer.

Food poisoning
Another widespread cause of infection in the warmest months is foodborne illness. Because bacteria thrive in the warm, moist environments of the summer, there is usually a surge in food poisoning cases each year. On top of that, cooking outside without access to the same safety controls of a kitchen, such as refrigerators and sinks for handwashing, increases the risk of bacteria getting into your food.

Recreational water illnesses
Different types of infectious bacteria get transmitted through bodies of water, such as swimming pools, hot tubs and lakes. Some of the most common diseases that spread through water include Giardia, Crypto, Norovirus and E. Coli. Swimming can also cause water to become trapped in the ear canal and grow bacteria, resulting in a painful condition known as swimmer’s ear. Additionally, the bacteria naegleria fowleri can cause amebic meningoencephalitis—a rapid and usually fatal infection that can be found in warm, polluted and still water. So make sure your pool is clean before jumping in!

Polio is the best-known illness caused by an enterovirus. Children who were infected would have a mild sore throat and fever, and then within a few days, could develop meningitis or paralysis. Fortunately, because of immunizations that have since been developed, polio is practically eliminated in the West, but there are other enteroviruses which can cause illnesses. These include group A and B coxsackieviruses, echoviruses and other enteroviruses. These infections usually cause a cough, a runny nose, diarrhea and vomiting, but can also cause more severe conditions, such as aseptic meningitis, encephalitis and myocarditis.