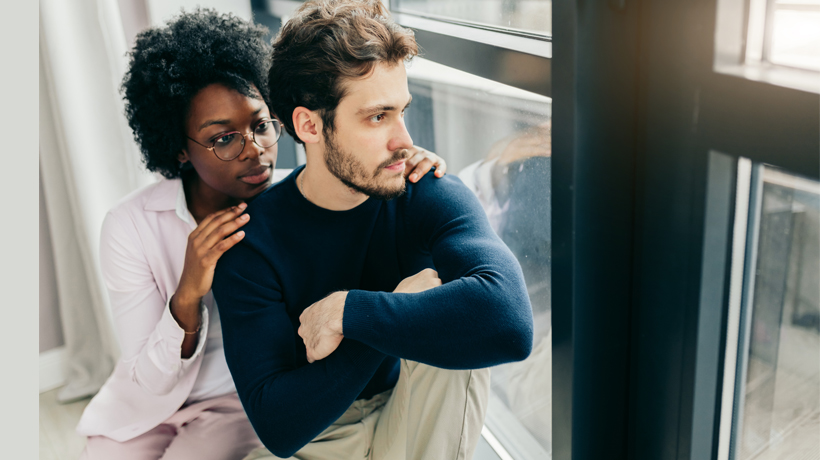 Regardless of how well we might think we know our partners, we cannot always make accurate assessments of their truest feelings and emotional states. Although verbal communication is important to the success of any relationship—and can often mitigate this problem—sometimes the subtle, non-verbal signals our partners send us are more telling than anything they could say out loud. With that, here are four signs that your partner might be sending you and what to do about them.

He is hurt
Although he might attempt to verbally write off or express his indifference to a seemingly-resolved or forgotten issue, he could actually still be hurt by it.  According to CBS News, he might be expressing subtle body language signs indicative of emotional pain and a desire to hear an apology.

For example, when, in conversation, his feet, pelvis, and upper body are positioned away from you and/or his arms are crossed to create a protective barrier between your body and his, he could be signaling defensiveness and pain. In the same vein, if he juts his head forward, has his arms at his sides, and/or turns his body sideways, he could be showing you that he has no intention of fighting and simply wants to end the conflict.

If you observe one or more of these behaviors, communicate your concerns to your partner about his feelings. Should he be hesitant to acknowledge them or seem indignant, simply let him know that you care about him and would like to talk to him.

He feels distant from you
Perhaps, in the bustle of your daily lives, you and your partner have become too busy to make sufficient time for one another. It is possible that in missing these crucial moments with you, he has begun to feel distant.

According to body language Blanca Cobb, if he neglects to wait that extra second for you to catch up with him when you two get out of your car or walk out of a restaurant, he might be indicating that does not feel as close to you as he once did. Even though this is a subtle behavioral change, it speaks volumes about his perception of the relationship.

Another sign of this withdrawal might be a change in the kind of affection he shows you. Perhaps you are accustomed to passionate kisses, but now he seems only to give you pecks on the lips or cheek.

If you notice these shifts, try carving out a little more time for the relationship, even if it means sacrificing other responsibilities.

He might want to break up
Although many of the following behaviors are trivial independently, a hefty amalgamation of them might indicate the existence of an issue that requires serious discussion.

If he is withdrawing more and more from physical contact, acting generally more aloof, and failing to give you his undivided attention when you spend time together (particularly if this is a newly-adopted behavior), pay attention. He might be in a distracted state because of doubts he has about the relationship.

He is being unfaithful
Unfortunately, sometimes a partner’s lack of verbal communication can signal the existence of a more serious problem. In an article on CBN.com, an anonymous woman describes her experience of discovering her husband’s affair. Here are some of the warning signs she wishes she hadn’t missed:

If you notice your partner behaving similarly, have a candid conversation with him to address your suspicions.

Although these warning signs can be helpful guides about your partner’s complex behavior, they should only act to supplement a pre-existing foundation of adequate communication.