5 Behaviors Narcissists Exhibit When They Secretly Feel Insecure About Themselves 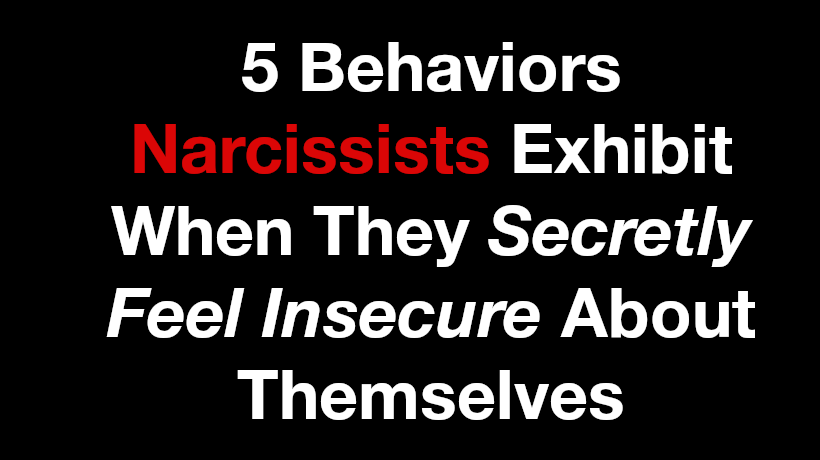 By now, you know what a narcissist is. If you do not know, a narcissist is a person who has an excessive interest in or admiration of themselves. They tend to engage in gaslighting, lack empathy, may not be able to listen because they are preoccupied with themselves among many more traits.

What you may not know is that they tend to overcompensate because they secretly feel insecure inside. So when you see a narcissist engage in these traits and behaviors, note that they are feeling insecure about themselves and must put out a grandiose sense of self-image to make themselves feel better.

This one might be a little obvious since the definition of a narcissist is a person who has excessive admiration and interest in themselves. As Preston Ni MSBA says, while it is not terrible to brag, a narcissist brags in an unhealthy way.

When they engage in this type of behavior and bragging, this is due to the fact that they are trying to create a mask to hide behind and “submerging an insecure, wounded self,” as Dr. Ni puts it.

OK, let’s be real. No one loves to be criticized harshly for what they are doing. Constructive criticism, however, is different in that the person who gives the criticism does so in a non-demeaning way. Dr. Seltzer says, “In fact, anything that threatens their need to feel superior can lead to their fiercely projecting onto others what, legitimately enough, they’ve been accused of.” He goes on to note that when a narcissist is criticized (constructively and in a healthy way) they may be bruising their ego because they are forced to think that they are not the absolute best thing to happen since sliced bread.

What makes narcissists over-compensate for their chronic anxieties and insecurities is that, deep down, they believe that to be okay, they must be more than okay. And, too, viewed by others this way as well, Dr. Seltzer says.

Narcissists love attention when it is on them. They tend to get jealous when the positive attention is not on them because it, once again, bruises the ego. This is part of the reason why they are always looking for what is known as narcissists’ supply, what Seltzer refers to as  “individuals who’ve tacitly agreed to serve them and whom they can assuredly feel better than.”

Believe it or not, narcissists manipulate others because they do not believe they are able to achieve what they want in a healthy way, according to Ni. There are many types of narcissist manipulation including negative, positive, deception and intrigue, helplessness, and abuse. Ni breaks them down further into more detail.

A.   Negative Manipulation – Intended to gain an advantage by causing the victim to feel inferior, inadequate, insecure, and/or self-doubt.

B.   Positive Manipulation – Intended to bribe the victim emotionally to win favors, concessions, sacrifices, and/or commitments.

C.   Deception and Intrigue – Intended to distort the perception of the victim for easier exploitation.

D.   Strategic Helplessness – Intended to take advantage of the victim’s goodwill and a guilty conscience.

E.   Hostility and Abuse – Intended to dominate and control the victim through overt aggression.

Ni states that [narcissists] can emotionally bribe them to “win favors, concessions, sacrifices, and/or commitments.”

Unable to Understand the Complexities of a Real Person

If they are able to get themselves into a romantic relationship, it can be difficult for narcissists to understand and see their significant other as a real person with real feelings. They will tend to view people as someone who they are able to control and manipulate. Ni puts it simply, “The bottom line of being in a relationship with a pathological narcissist is that your thoughts, emotions, and priorities are constantly invalidated. You exist merely to serve the whims and the pleasures of the narcissist.”