5 Comebacks to Shut Down an Abusive Manipulator 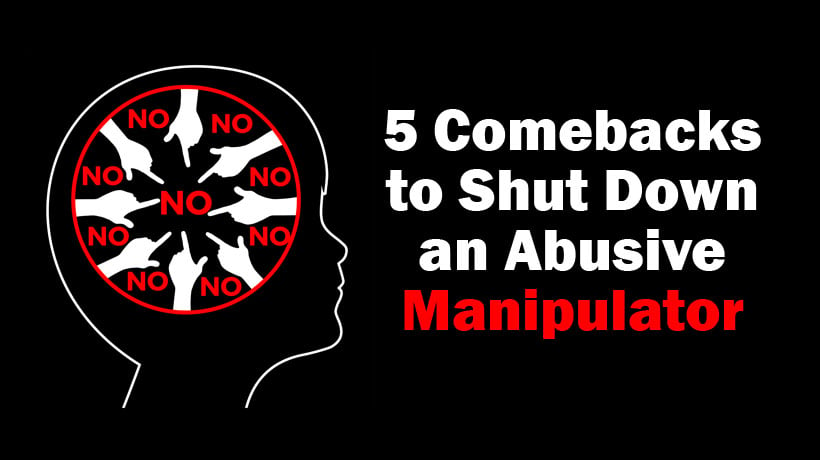 Has a bully in your work or home life trampled you this week? What if I told you that you could turn the tables on them every time, without going toe-to-toe equally becoming a jerk? You can. Here’s how to stop a bully in his tracks.

Take control
A bully’s abusive comments can place you on the defensive, scramble your brains and even leave you speechless. Your reaction rewards them. Don’t let a bully put you on the spot, have the last word or to push you to make statements you later deeply regret. Take control of the encounter by asking the bully a question. As soon as he answers, you’ve changed the power dynamic.

If a bully in your personal life says, “Those pants make your butt look fat,” turn the tables with a question, such as, “And how does that matter to you?” Then, watch the bully blink in surprise and struggle to answer your question.

If a bully co-worker says, “You certainly blew that,” don’t defend your actions. Instead ask, “How would you have handled it?” As soon as the bully answers, you can respond with a flat, conversation-ending “Oh” or even an “I liked what I did better.”

Refuse to accept false blame
Bullies blame others for everything that goes wrong. A raging husband may shout, “I’m yelling because you’re not listening” or “I’m angry because you’re stupid.” A bully co-worker may insist, “The boss is mad at me because you didn’t cover for me.”

Turn the tables on the shouter by asking, “You’re giving me the power to make you yell?”
Ask the co-worker, “So, I’m responsible for how the boss views you when I won’t lie for you?”

Arsenal
You can stop a bully gunslinger in his tracks with quick replies that signal you’re not easy prey. Arm yourself with an arsenal, such as:

“Is that the best you’ve got?” with a look that says “Maybe you can do better next time.”
“Pardon me?” said with a surprised look as if you can’t believe they said what they did.
“Are you done?” to end a conversation.
“Once was almost funny, but twice is old,” said in response to a bully who insults you twice.

Make it clear the bully has no power
Bullies love to control. You turn the tables when you let them know they haven’t. Comebacks that signal their abusive comments didn’t work include:

“You have a right to your opinion. I have the right to ignore it;”
“Your bullying used to work on me;”
“I heard what you said, now move on;” and
“You really should come with a warning label.”

Finally, bullying is a two-way interaction. You can’t be bullied unless – at some level – you allow it.