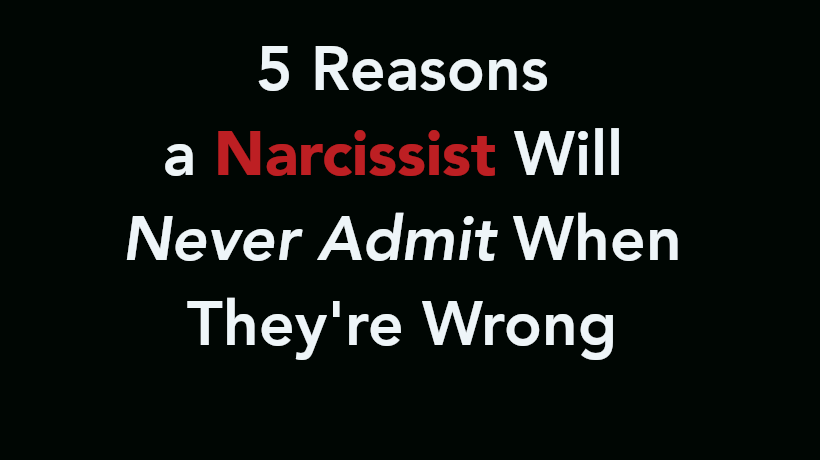 Dealing with a manipulator or a person with narcissistic tendencies can be the most draining job. At every step, it seems as if you’re doing something wrong when you’re really the one doing everything right in the relationship. Escaping the grasp of a narcissist can be difficult and getting them to see their faults and mistakes is like pulling teeth—challenging and unpleasant. Analyzing these five reasons exposes why a narcissist will never admit they’re wrong and might help you understand how to move forward.

1. It’s Uncomfortable for Them

If there’s one thing a narcissist hates doing, it’s going outside their comfort zone. Dr. Julie Hall says it’s hard for most people to admit when they’re wrong but healthy people know when it’s time to apologize or acknowledge fault. Dr. Hall says narcissists deliver fauxpologies, which usually revert blame back onto the victim.

2. It Makes Them Feel Insecure

Letting others see that you’re not perfect and that you’ve made a mistake is a perfectly human thing to do. For most of us, says Dr. Karyl McBride, admitting our faults makes us feel better about ourselves while narcissists just can’t let that happen. “If caught in their mistakes and there is no way out of it, the narcissist can’t handle the vulnerability it causes,” says Dr. McBride.

The number one thing narcissists must have to keep people under their grasps is control. Without control, the grip they have over a person gets weaker and weaker. As a result, narcissists don’t open themselves up for criticism. According to Dr. Hall, they use gaslighting and “narcissistic rage” in the hopes that their victim will back off and not confront them again.

4. It Deflates Their Ego

Because narcissists never admit fault or have people hold them accountable for their actions, their egos are usually ten times the size they should be. “Some people have such a fragile ego, such brittle self-esteem, such a weak “psychological constitution,” that admitting they made a mistake or that they were wrong is fundamentally too threatening for their egos to tolerate,” says Dr. Guy Winch.

5. It Forces Them to Take Responsibility

Responsibility opens up a door that narcissists would rather keep closed. Most normal, functioning human beings accept their role in situations and use them as lessons for the future. Dr. Hall says that a narcissist will form their life around feelings of “invalidation” by denying and projecting responsibility onto others—and it’s usually the people closest to them who end up suffering.