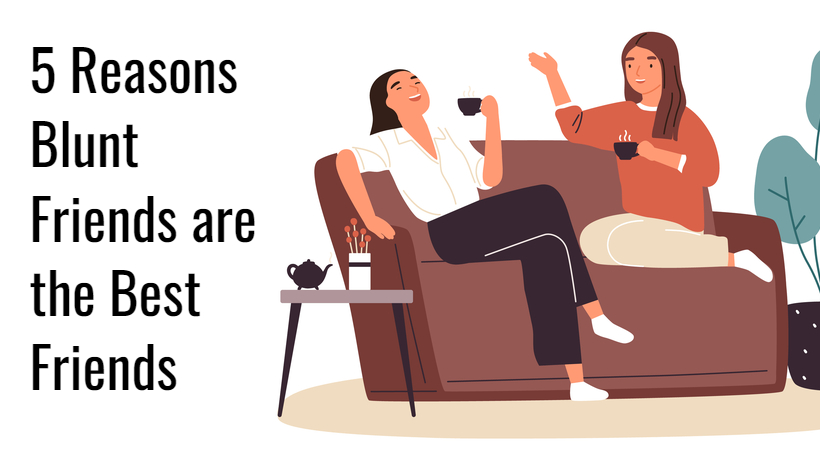 Although it may not seem like it at first, those friends who always tell the honest truth are probably the ones who have your back the most. However, there’s a thin line between being blunt and just being plain mean. Blunt friends, while sometimes underappreciated, will provide solutions to your problems—and some of them might be problems you didn’t even know you had! While super straightforward people are not everyone’s cup of tea, there are huge benefits to having them around.

They Have Your Best Interest At Heart

If nobody else has your back, your blunt friend will. Their honesty levels may be a little hard to grasp at first but they want to see you succeed. Just like that high school sports coach or that really tough teacher you thought was out to get you, they always push you to be better. Once you make it into a blunt person’s inner circle, they’ll fight to make sure you’re being the best you can be, and appreciate when you do the same for them.

They Will (Always) Tell You The Truth

It might get a little frustrating but your honest friend will tell you what you need to hear instead of what you want to hear. While they recognize the importance of affirmation, they have a unique ability to see all sides of a situation. If you’re wrong, they will tell you. But they will also take the time to explain why, provide potential solutions, and put you into a different headspace. Also, they make it a habit of saying things to your face so you don’t ever have to worry about them talking behind your back.

You Can Read Their Mood

Some people have excellent control of their nonverbal cues, but a lot of blunt people don’t. If something (or someone) is bothering them you will be able to tell. If they have mastered the “I have nothing nice to say so I won’t say anything,” mantra, the next best step is to study their body language. When words play a necessary role, they will openly express to you what they are thinking. They are open books when it comes to sharing their emotions.

They’re Not Afraid To Admit Their Faults

Because they have no problem pointing out other people’s faults, honest people usually have less trouble pointing out their own. They tend to take criticism pretty well if it’s delivered with genuine intentions. As their friend, sometimes blunt people expect you to hold them to the same standards they are holding you. To avoid disappointing you, they will be honest and open when they make a mistake. They believe in equal friendship, which they can’t have if they are too busy judging you.

Those friends who know how to knock down a mood also know how to pick one up. As blunt people make their way through life, they often keep an open mind to new concepts and adventures. They can say screw the rules of society and threw caution to the wind. Spontaneity is a common trait among blunt people, who will act first and consider the consequences later. They will force you to overcome things you thought you couldn’t and do it so smoothly that you may not realize it until later.

Disclaimer: This article is the opinion of the author