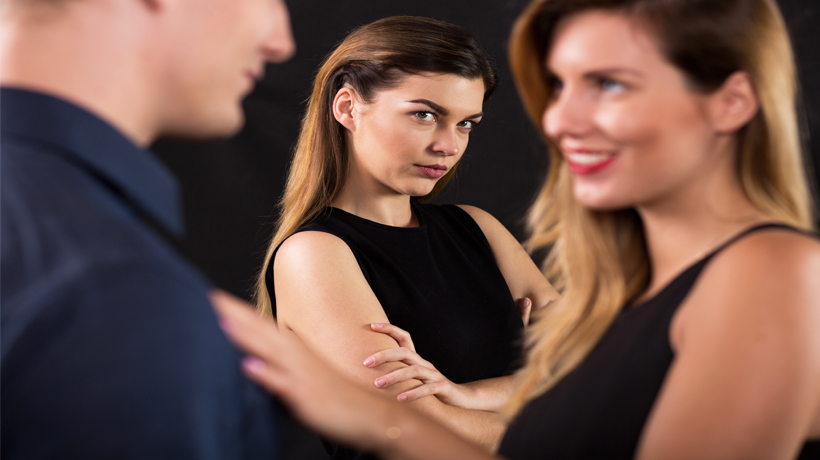 You never see her
If he goes out of his way to make sure you two don’t bump into each other, that’s a bad sign. He’s worried about you observing how close they really are.

When you say you’re concerned, he blows you off
“No baby, we’re just friends, don’t worry about it.” That could definitely be true. But if that’s his response after you question him about how close they are – he’s blowing you off, not taking your concerns seriously or running from the subject.
A man has to acknowledge that—to a spouse or mate—a female friend sets off your alarms. To ignore that either means he’s dumb – like bag-of-hammers kinda dumb – or he is being deliberately ignorant. Either reason should give you pause.

He buys her stuff
“Hey honey, check it out – I got a two for one deal on these diamond earrings!” No. Just no. Friends don’t buy friends diamond earrings.
I have a couple of guy friends who I’ve known for 20, 30, 40 years – I’ve never bought any of them anything and vice versa.
If he spends money on her, he’s trying to impress her. This is probably the biggest red flag of them all.

They clock a lot of time together
Talking on the phone, texting, hanging out, video chatting, online gaming – are they spending waaaay too much time interacting with each other? Friends like to spend time together and they can even rely on each other for morale support during hard times, but if his “friend” is the person he speaks to or spends time with instead of you, there is a problem.

Their skin touches for any reason
Look, it’s one thing if you give a high five when you meet up, but ANY other touching is FORBIDDEN.
What? Are you seriously ‘roughhousing’ on the couch? I don’t care if it’s Wrestlemania!
There are like 7.5 billion other people who could be putting lotion on her back right now.

He critiques the men in her life
Friends should be protective of each other. If something bad goes down, friends have each other’s backs. But if your man is getting bogged down about the little personal things that all couples work through, then he might be too close to the situation.
If he thinks no one is good enough for his lady friend or that ‘these men don’t know how to treat her,’  he is much too invested in her romantic life.