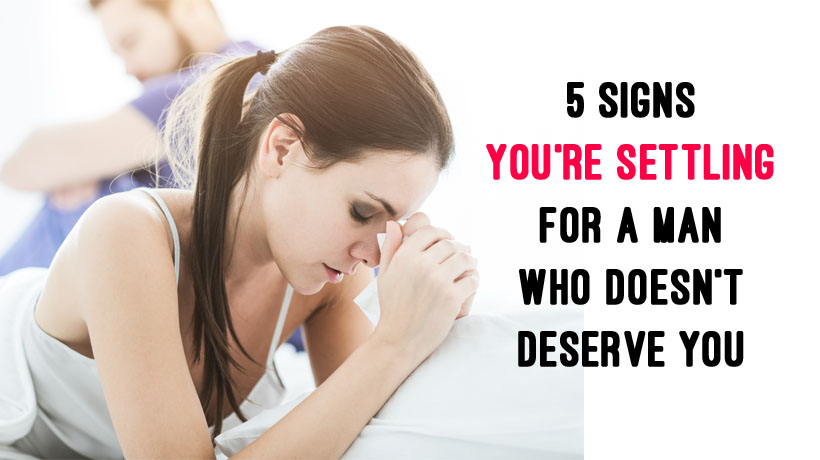 If your relationship feels like it’s missing something, maybe it is. Too many times, women settle for men who don’t deserve them – maybe it’s to avoid being single or maybe it’s out of fear that they won’t find someone else. No matter the reason, make sure the guy you’re with is worthy of you before you get too emotionally attached, and beware of these five signs.

You make excuses for him
When you talk about him to your friends or family, do you feel like you have to make excuses for the way he behaves? That’s a red flag. Justifying the way your guy acts proves that you know you’re settling; if you didn’t, you wouldn’t feel like you needed to explain away his less than ideal behavior. Find someone you want to gush about, not vindicate.

You constantly compare
It’s almost impossible for women not to compare their new relationships to those of their past, so it’s perfectly normal to measure your new guy up to his predecessor. But if you’re constantly thinking back to that old boyfriend, the current one may not deserve you. Don’t settle for a guy who makes you long for the past – you want someone who makes you excited for the future.

You still feel lonely
Many times, when a woman is settling for a man who isn’t good for her, it’s because she’s scared of being alone. She is more willing to latch onto a man that isn’t enough than be sans relationship. But if you latched onto a new guy and still feel lonely, he may not be satisfying your needs. Don’t waste your time; spend it with yourself instead.

You hope it’ll change
Before you settle down with a guy, you should be sure that he is exactly who you want to commit your time to—that means appreciating every part of him. So, if you’re in a relationship that you wish would become something else, you’re settling. Keep looking for the guy who is exactly what you want right now.

You’re trying too hard
If it feels like you’re forcing yourself to enjoy this relationship, you’re fooling yourself. While relationships do require effort, it shouldn’t be a full-time job to keep the passion burning. When the right guy comes along, you won’t have to try to feel a spark, it will be undeniable.