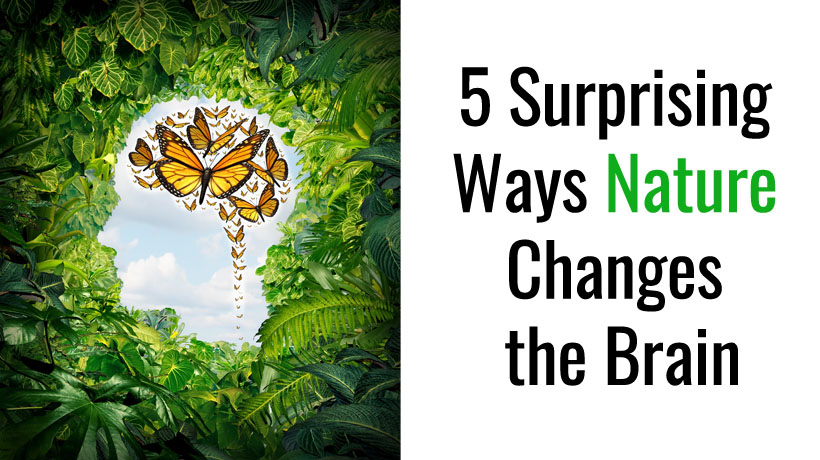 Nature: it sustains, nurtures and provides. However, in our increasingly digital world, it seems we’re dismissing nature or ignoring it while our brains work to keep up with tasks. No one has the time or attention to relax and spend an hour or two in a forest. Yet, that is precisely what people need most, because nature can change your brain’s processing. How? Here are five ways nature triggers processes in the brain.

It inspires creativity
According to Jill Suttie’s post on Greatergood.berkely.edu, “In a 2012 study, Strayer and his colleagues showed that hikers on a four-day backpacking trip could solve significantly more puzzles requiring creativity when compared to a control group of people waiting to take the same hike.” This means that nature unlocks a certain quality in people’s minds, enabling them to be creative and to feel connected to ideas. That quality is freedom, which allows the mind to create without burden.

It improves your focus
Your brain is bombarded with information, tasks and stress each day. Altogether, they overwork and cloud your mind, leading to more mistakes and more troubles to worry about. Scientists have found that the best way to recover and sharpen your focus is to surround yourself in nature. A study gave participants two SARTs (sustained attention to response tasks) to complete, separating them with a short break. During the break, the subjects were either shown a picture of a skyscraper roof or a roof covered in nature. According to Chris Mooney’s article from the Washington Post regarding the results, “The students exposed to the green roof scene not only reported that it felt more ‘restorative,’ [but] they performed better on the task.”

You may become kinder
This might sound strange: How can nature change a person’s personality? Well, according to Jaymi Heimbuch on Treehugger.com, “A new study by the University of Rochester found that after looking at nature scenes, people feel closer to their community, are willing to give more money to a charitable cause, and care more about social outcomes than they are after looking at manmade scenes.” From this, we can gather that nature forges connections between people due to brain chemistry changes and decreased negativity. When people feel good, they’re more inclined to be kinder and to reach out to others.

It alleviates feelings of depression and anxiety
Scientists and psychiatrists are also taking note of how nature influences a person’s mood. People tend to detach and exude more positive energy when they’re around nature, causing them to be happier, less depressed and more cognitively aware. According to the results of a study conducted by Juyoung Lee regarding cardiovascular relaxation and nature, “Participants experienced less negative mood states such as tension-anxiety, anger-hostility, fatigue, and confusion and felt more comfortable, natural, soothed, and refreshed after forest walking.” Nature has a way of amplifying endorphins, enabling people to feel good, and benefiting mental health for overworked city and office dwellers.