5 Types of Gynecologic (Pelvic) Cancers That Every Woman Should Know 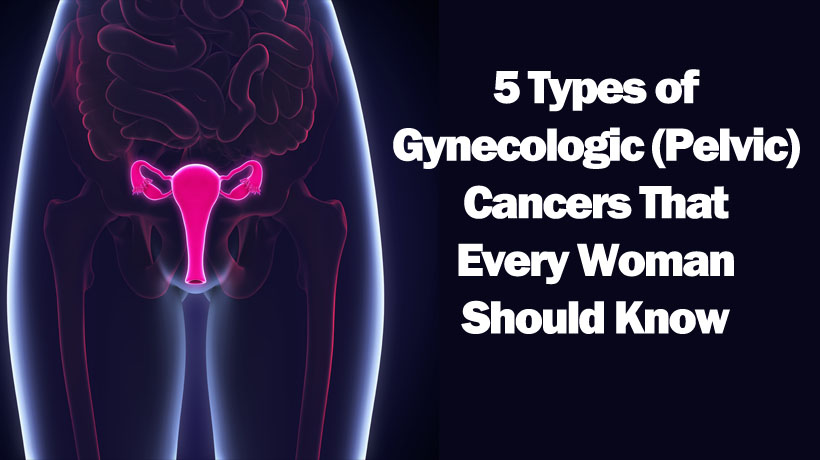 Gynecologic, or pelvic cancer, refers to a variety of cancers involving the female reproductive organs. In America, every six minutes a woman is diagnosed with gynecologic cancer. Nearly 1 in 20 women are affected by the disease, and it’s estimated that there will be 91,730 new cases diagnosed in the U.S. this year alone—resulting in a predicted 28,080 deaths. Some of these gynecologic cancers have been called “silent killers” because women are often unaware of the signs of these cancers until it’s too late.

Cervical Cancer
Cervical cancer is the second most common cause of death by cancer in women internationally. In the United States alone, 12,000 women are diagnosed with cervical cancer each year. The cancer is caused by a virus called human papillomaviruses (HPV), which spreads through sexual contact. Although most women’s bodies are able to fight the infection, the virus can sometimes lead to cancer. Risk of cervical cancer increases if you smoke, have many children, have many sex partners, use birth control pills for a long time, or have HIV infection. The cancer may not cause any symptoms at first, but as it develops, you may experience pelvic pain or bleeding from the vagina.

Ovarian cancer
Ovarian cancer usually occurs in women over age 50, but it can affect younger women as well. The disease causes more deaths than any other cancer of the female reproductive system, and it’s the leading cause of death from gynecologic cancer in the world. The cause of ovarian cancer still remains unknown, and there is still no effective screening test for the condition. Women with ovarian cancer often have no symptoms until the disease has advanced and is harder to treat. That’s why more than half of women with ovarian cancer have advanced-stage disease at the time of diagnosis.

Endometrial (uterine) cancer
Endometrial, or uterine cancer, is the most common gynecologic cancer. Although the exact cause is unknown, increased levels of estrogen appear to contribute to the development of the disease. The uterus and its surrounding structures might change in the size, shape or consistency as the cancer advances. Some risk factors include the presence of estrogen without progesterone, diabetes, hypertension, the use of the medication tamoxifen, and experiencing a later age of menopause. One of the most common risk factors for developing endometrial cancer is obesity. Women who are overweight have higher circulating levels of estrogen, which increases their risk for developing the cancer.

Vaginal cancer
Vaginal cancer is one of the rarest forms of gynecologic cancers. It usually affects women between 50 to 70-years-old. Because vaginal cancers are often linked with the sexually-transmitted virus human papillomaviruses (HPV), the disease can often be prevented by vaccinating women and young girls before they are sexually active.

Vulvar cancer
Vulvar cancer is a rare, abnormal growth formed on the external female genitalia. The disease typically occurs in elderly women. Fortunately, vulvar cancer is very curable when found at an early stage; however, treatment can be harmful to a patients’ sexual function, bladder and rectal function and body image.