5 Weird Advantages of Being Left-Handed 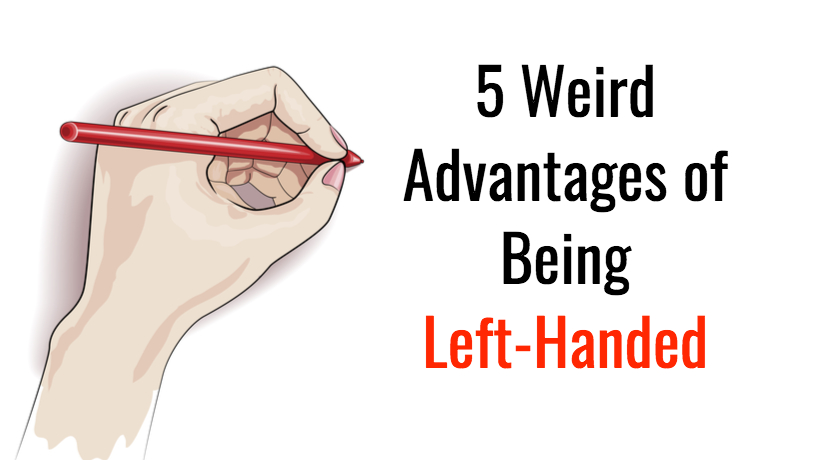 Sorry, lefties. There doesn’t seem to be one scientific field dedicated to left-handed people.

Statistics published in the journal Psychology Bulletin have determined only about 10 percent of the human population is left-handed. Although scientists have done some research about laterality (the term for the dominant side of your body), there are only a scattering of studies that have explored what makes a lefty unique. Some of these topics have studies that have contradictory results.

We might not know everything about what makes a left-handed person unique, but here is some initial research that indicates why favoring your left side might be fortuitous.

More creative
In a study for the American Journal of Psychology, researchers tested participants in a variety of problem-solving techniques. The data showed left-handed men had higher divergent thinking scores than right-handed people, meaning they were more likely to think outside the box.

“These findings on creativity are also consistent with research which shows that, particularly in males, the right frontal lobes are critical for cognitive novelty: dealing with new tasks or situations where the brain’s 10 existing ‘repertoire’ cannot be applied,” write Kevin Denny and Vincent O’Sullivan, who quoted Coren’s study in their own research, “whereas the left lobes deal with cognitive routinization: situations that the brain is familiar with and has pre-existing strategies to use.”

This means that lefties are more likely to engage in a creative style of thinking.

More successful
In their study for the Journal of Human Resources, Denny and O’Sullivan found left-handed men earned about four percent more per hour than right-handed people. They suggested that their success may be influenced by the idea that left-handed people are more creative.

Better at sports
Boxing has its own term for left-handed people: southpaws. As it turns out, southpaws may have some advantages in sports.

A French study in Human Brain Mapping suggests left-handed athletes might have a biological edge because lefties usually favor the right brain hemisphere. The right brain is in charge of both their dominant hand and visual-spatial awareness, which helps with coordination.

Yet the reason southpaws perform better in sports might be simpler than that. Baseball coaches stack their better outfielders in anticipation of right-handed batters. However, when a left-handed batter comes to the plate, his swing takes the ball to the part of the field with the weakest players. In other sports, such as tennis or hockey, opponents are forced into their non-dominant side when they play defense, giving southpaws a better chance to score.

Better at multitasking
If you know a lefty who can juggle writing an email, responding to a text, and cooking a meal all at the same time, your friend may be part of a bigger trend.

A 2008 study in the Illinois Research Consortium discovered left-handed people and right-handed people tended to use different styles when it came to handling tasks. According to their data, lefties proved more capable and more comfortable switching between tasks, whereas right-handed people depended on completing one task before starting the next.

Better drivers
At least in parts of the world where cars drive on the right side of the road, left-handed people tend to be better drivers. In a study of 1,500 drivers over 10 years, the Center for Handedness Research in Albuquerque, New Mexico studied how often left-handed drivers would slam on their breaks, drive late at night, and perform K-turns and other difficult driving maneuvers. They found left-handed drivers learned to drive more quickly and successfully than right-handed drivers.

Dr. Glenn Haversham, the study’s author, says the way cars are made to favor right-handed people (such as the placement of the gear shift) actually benefits lefties because they are less likely to become complacent.

“Because we drive on the right in this country, left-handed drivers may be used to a kind of constant revision of their instincts, keeping them more on their toes and ready to react to sudden threats.”

As with southpaw athletes, drivers have learned to adapt to a world that favors people with a dominant right hand. As it turns out, this can actually be advantageous.