6 Complications of Breast Implants that Many Women Don't Know 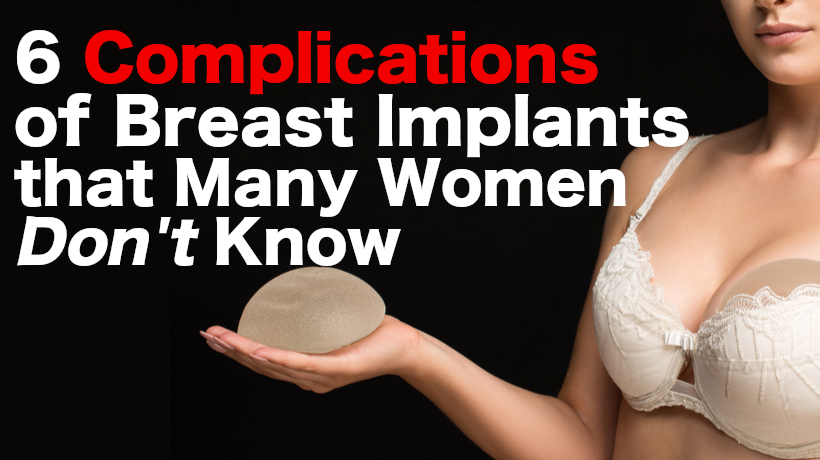 There are many reasons why someone may choose to get a breast implant. They could be insecure about their breast size, have dealt with breast cancer, or a recent weight loss causing skin pockets to form. Whether you are considering getting a breast implant now or in the future, here are a few complications to be aware of when undergoing breast augmentation surgery:

Wrong or faulty position of the implant

Wrong or fault positioning of breast implants can make the breasts look lopsided or may even have one higher than the other. When this happens, it is usually the cause of the doctor not taking their time with the surgery or not having the expertise to put the implants in the correct position, according to Orange County Breast Implants.com, a site for breast implants in California. The site states that “Breast implants don’t usually move on their own unless the patient develops a capsular contracture, or tight scar tissue, around the implant.”

Scars are part of the natural process of breast augmentation. The body automatically reacts to any foreign object it detects within it and attempts to isolate said object by creating a barrier of scar tissue around it, plasticsurgery.org writes. The site states that scars will almost always appear red or pink before “they begin to heal and become less noticeable over time. The rate at which your scars will heal can also depend on factors like your age, genetics, skin tone, and exposure to the sun.”

Sagging can still occur even with breast implants. The FDA states that ptosis (the medical term for sagging) is normal, as it is the result of aging, pregnancy, or weight loss. While sagging is a normal symptom, women who have breast implants may also see deflation in their breasts. The FDA defines deflation as “Leakage of the saltwater (saline) solution from a saline-filled breast implant, often due to a valve leak or a tear or cuts in the implant shell (rupture), with partial or complete collapse of the implant.”

There are a number of factors that can cause a person with breast implants to feel bruising, swelling or even bleeding around the chest area. Bruises and swelling may happen to those who have developed a hematoma. While most hematomas may happen right after surgery, there have been cases where hematomas appear while the breast implant is in place. The FDA warns, “The body may absorb small hematomas, but large ones may require medical intervention, such as surgical draining.”

Swollen lymph nodes, seroma(collection of fluid around the implant), rashes, and extrusion (implant appears through the skin) may also cause bruises, swelling and/or bleeding.

Several stories have shown how women who have had breast implants for many years are starting to experience symptoms such as depression, fatigue, anxiety, chest pain, chills, rashes, and hair loss. However, there aren’t enough studies to show if there is a direct link with women who have breast implants with the symptoms described above. Dr. Andrea Pusic, Joseph E. Murray Professor of Surgery at Harvard Medical School says these symptoms can have a variety of causes such as menopause, thyroid problems or autoimmune disease and we won’t truly know whether implants are truly the cause of these symptoms.