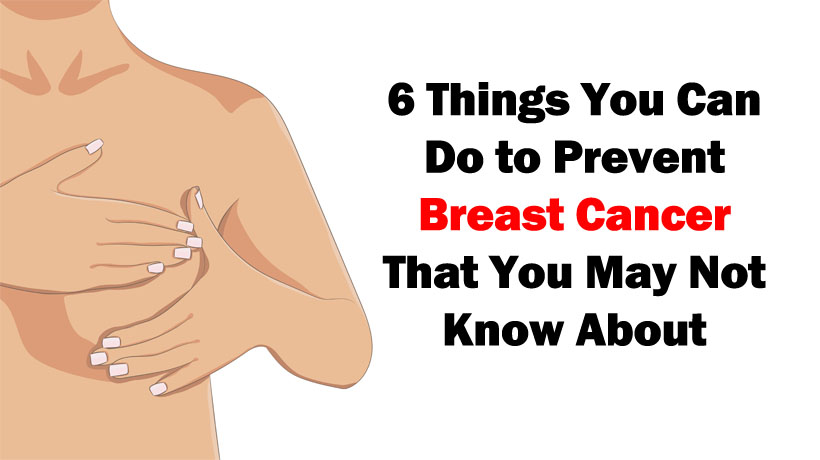 Recent research suggests that people who eat dinner before 9 p.m.—or at least two hours before going to sleep—have a 20 percent lower risk of breast cancer than those who eat after 10 p.m.—or go to bed shortly after their final meal. The study, published on June 17 in the International Journal of Cancer, presents one more possible way to prevent the second most common cancer in American women, of which 1 in 8 will be diagnosed.

In fact, there’s even more that women can do to prevent breast cancer than most realize. The biggest risk for breast cancer is simply being born a woman, but taking certain measures (such as the following) can reduce your probability of developing the disease.

Find out the densities of your breasts
When you have more tissue than fat in your breasts, it is harder to detect cancer on a mammogram (because both tumors and breast tissue show up white, while fat looks dark). This is a problem because it’s paramount that breast cancer is detected and treated early.

On top of that, having dense breasts makes you six times more likely to develop breast cancer. Although there’s nothing you can do to lower breasts high in density, you can better protect yourself by following up with a doctor and potentially adding more cancer screenings in your future.

Exercise, exercise, exercise
Exercise seems to protect against breast cancer by helping to maintain weight and estrogen levels. One study found that women who gained significant amounts of weight were 40 percent more likely to develop breast cancer than those who had not. That’s due to the link between fat and estrogen, which can stimulate cell overgrowth, and in turn, breast cancer. Ready to take action? Get moving. The Women’s Health Initiative found that women who walked briskly between one to three hours had an 18 percent lower risk of breast cancer than their inactive counterparts.

Know your family history
Cancer is often hereditary, and it can be passed from one generation to the next through a set of mutated genes. Talk to a medical professional if anyone in your family has had cancer (that includes extended family and your father’s line of women, too). If you know you’re at a higher risk for cancer, you might be encouraged to keep better tabs on your health. When breast cancer is caught early, the 5-year survival rate is 99 percent, according to the American Cancer Society.

Avoid radiation
Ionizing radiation—the kind in many high-tech screening tests—is a risk factor for all cancers because it can cause DNA mutations in cells. That doesn’t mean you should cancel your mammogram, or never go through airport security again. But all radiation exposure should be in moderation and as recommended by a medical professional.

Consider breastfeeding
According to a recent study in the American Journal of Clinical Nutrition, women who breastfeed for the first six months have a 10 percent reduced risk of death from cancer. This is because a woman usually will not menstruate while breastfeeding, which limits her number of menstrual cycles and lowers the amount of estrogen in her body that could stimulate excessive cell growth.

Eat right
Research continues to show that your diet can impact your risk of cancer. The American Cancer Society recommends 2.5 cups of fruits and vegetables per day, limited processed and red meats, whole grains over white bread, and no more than one alcoholic drink per day. In fact, around three drinks per day increase your breast cancer risk to 1.5 times that of someone who abstains from drinking.

Begin to incorporate these measures into your daily life today for a healthier future tomorrow.