7 Behaviors That Can Keep People From Finding Love 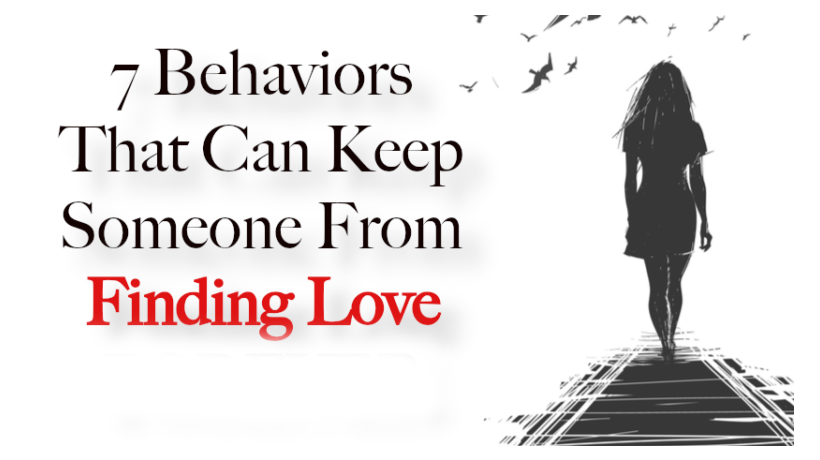 Have you ever wondered why you’re single when all of your other friends are in happy relationships? Being single can sometimes be a blessing, but there are times when you may wish to have someone else to love and hold. Below is a list of mistakes that single people make that help them to stay single (especially when they don’t want to be).

If you’re stuck on an ex

Your brain is a great and functioning organ, but sometimes those old memories just won’t go away. You remember the good times you had with an ex and wallow in the fact that maybe you and he could have worked out. If only.

Candice Jalili, a writer for Elite Daily and Cosmopolitan Magazine, says, “ Once a relationship is over, it’s easy to idealize it and keep your ex on a pedestal that he didn’t rightfully belong on. But all that’s doing is preventing you from giving someone new a fair shot.”

She explains that you have to accept that there was a reason why the relationship ended in the first place. If you place an idealized version of your ex in your mind and compare everyone to him, you’re bound to stay single.

You think you can change something about them.

A lot of women are guilty of doing this…myself included. There are times when you are interested in a person, and they say something along the lines of “I am not interested in anything serious,” or “I don’t see myself being married.”

Paul Carrick Brunson, an influential matchmaker and author of It’s Complicated: A Modern Guide to Finding and Keeping Love, says, “If you hear anything similar, don’t think you’re the one person who can and will change his perspective. You’ll just end up wasting your time and resources. You only have the power to change yourself.

You’re playing it a little too cool.

We all love people who aren’t entirely too clingy but going the opposite way may also be keeping you single. Playing it cool — like playing it so cool that they didn’t even know you had a crush on them — may be stemming from fear of rejection or intimacy.

Lisa Firestone Ph.D. says, “Our fears surrounding intimacy may manifest as concerns over someone “liking us too much,” an understandably irrational reason not to date a person.”

She explains further that we may become defensive about letting someone in after a relationship did not pan out. So while you may think it is cool to “play it cool,” it may be hurting your chances of getting into a relationship.

Firestone says that we tend to become defensive after a breakup. Women may start to believe that “there are no good men out there” or “all the good ones are taken.” Therefore, we tend to create unrealistic expectations to minimize the pain we may feel later on.

“When viewing the world from critical or distrusting eyes, we tend to write off a range of potential partners before even giving them a chance,” Firestone explains. “We think of dating certain people as ‘settling’ without ever seeing how that person could make us happy in the long-term.”

Brunson agrees. Being list-obsessed is also another issue. Brunson states, “We all have preferences, and there is absolutely nothing wrong with that. The problem is when we don’t secure our own needs first.”

You’re a negative nancy even on first dates.

Let’s say you finally got a date for that cute guy in your office. You’re all ready and dressed up for the big night, but your date keeps complaining. He makes something out of nothing. He blames you for every single thing. Brunson, in this case, says, “Toxic people are a huge energy drain. No matter how outwardly attractive or successful someone is, toxicity just ain’t sexy.”

You haven’t learned from past mistakes.

As a matchmaker, Brunson loves to ask his possible clients how many dates they have gone on in the last two years. While most answer no and also say they are not happy with that number, Brunson poses this question “What are you doing differently to change [the outcome]?”

To put it simply, Brunson says, “The bottom line is that in every aspect of our life (dating included), we can’t do the same old thing and expect different results.”

You don’t love yourself fully.

Firestone, Ph.D., admits she has spoken to many people who have expressed that they want a fulfilling relationship but believe strongly that no one worthwhile would ever be interested in them.

“We all possess ‘critical inner voices’ that tell us we are too fat, too ugly, too old, or too different,” Firestone explains. “When we listen to these ‘voices,’ we engage in behaviors that push people away.”

She explains that a lack of confidence may give off signals to others that you are not open, which may reaffirm your untrue beliefs.

“Some struggle to make eye contact or are reluctant to scan the room for who they might be attracted to,” Firestone elucidates. “When they are drawn to someone, they may fail to pursue their strongest attractions for lack of self-esteem.”