7 Not-So-Obvious Signs That the Lungs Are Failing 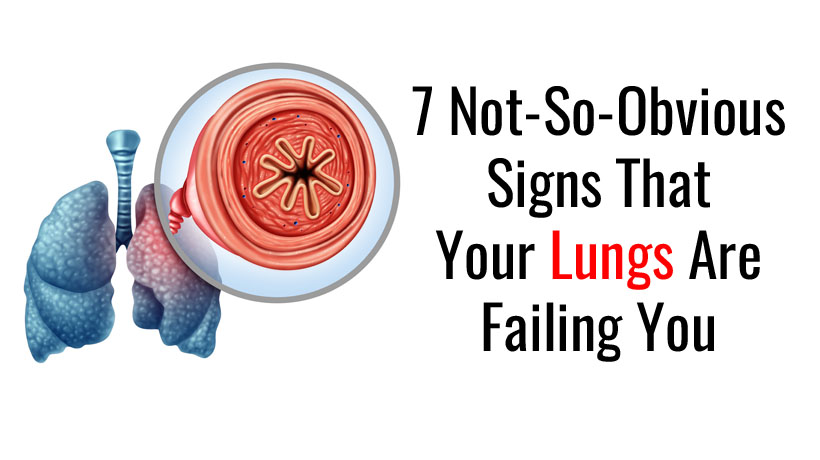 Lung diseases refer to any problems of the lungs that prevent them from functioning optimally. There are three main types of lung disease, which include conditions related to the airways, to the lung tissue and to the blood vessels in the lungs.

The most common lung diseases include asthma, collapse of the lung, bronchitis, chronic obstructive pulmonary disease (COPD), lung cancer, pneumonia, fluid buildup in the lungs (pulmonary edema) and blocked arteries in the lungs.

If you suspect that your lungs might be failing you, look through the symptoms below to determine if you should seek out a medical professional.

Chronic cough
A cough that lasts for a month or longer is considered chronic and is an important early sign that something is wrong with your respiratory system.

Chronic mucus production
Mucus, also called “sputum” or “phlegm”  by some, is produced by the airways as your body’s defense against infections or irritants that try to enter the body. But if you have high amounts of mucus for a month or longer, it could be an indication of lung disease.

Wheezing
Noisy breathing or wheezing is a sign that there is a blockage in your lungs’ airways or something that is making them too narrow.

Coughing up blood
When coughed up, blood may be coming from your lungs or upper respiratory tract. As is the case with all unusual symptoms involving blood: Check it out with a doctor!

Chronic chest pain
Unexplained chest pain that lasts for a month or more, especially if the irritation increases when you breathe in deeply or cough, is a warning sign that something is wrong with your respiratory system.

Fatigue
Low levels of oxygen in the blood, fragmented sleep patterns, chronic lung infections and lung cancer can all lead to increased fatigue. If you have some of the above symptoms, plus you’re feeling exhausted, check in with a medical professional.