9 Warning Signs of Celiac Disease Not to Ignore 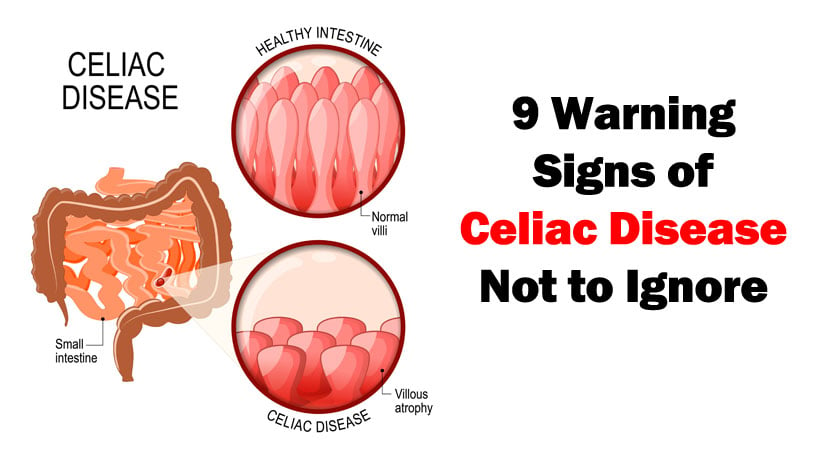 You might’ve heard everyone talking about gluten for the past decade, but what is it, really? Gluten is a type of protein found in grains including wheat, barley, spelt and rye. It’s found in tons of foods, and it wouldn’t be a problem if it weren’t for widespread intolerances to the substance called celiac disease.

Celiac disease is a disorder in which eating gluten triggers a sometimes intense immune response in the body, causing inflammation and damage to the small intestine.

Because it affects people differently, celiac disease can be difficult to diagnose. There are more than 200 known celiac disease symptoms, which often occur in the digestive system but can also pop up in other parts of the body. Some people develop celiac disease as a child, others as an adult.

To learn more about the disease, these are some of the most common symptoms reported by celiacs…

Gastrointestinal conditions
The touchstone, tell-tale sign of celiac disease are stomach problems. These can range in severity. Most commonly, patients will experience abdominal bloating and pain and bowel problems, such as chronic diarrhea, constipation, and pale, foul-smelling or fatty stool. Others might experience vomiting and weight loss.

Emotional effects
But not all signs of celiac are in the stomach. In fact, some patients will experience problems with their moods and emotions. Whereas irritability and behavioral issues are common in children, depression and anxiety might be experienced in adults.

Issues of the bones and joints
Some patients with celiac disease report bone or joint pain, arthritis, and osteoporosis or osteopenia (bone loss).

Central nervous system
Another group of symptoms reported by people with celiac disease has to do with problems of the central nervous system. These range in severity, from fatigue to seizures or migraines, to peripheral neuropathy (tingling, numbness or pain in the hands and feet).

Dental problems
An unexpected but common sign of a gluten intolerance is dental complications. Two of the most widely reported are dental enamel defects of the permanent teeth and canker sores inside the mouth.

Anemia
Many people with celiac disease will also develop an unexplained case of iron-deficiency anemia.

Irregularities of the reproductive system
These might include missed menstrual periods, infertility or recurrent miscarriages.

Skin conditions
Warning signs of celiac disease can show up on the skin. Of these, the most common is dermatitis herpetiformis, which is a fancy medical term for an itchy skin rash.