Are You Actually a Badass Based on Your Zodiac Sign? 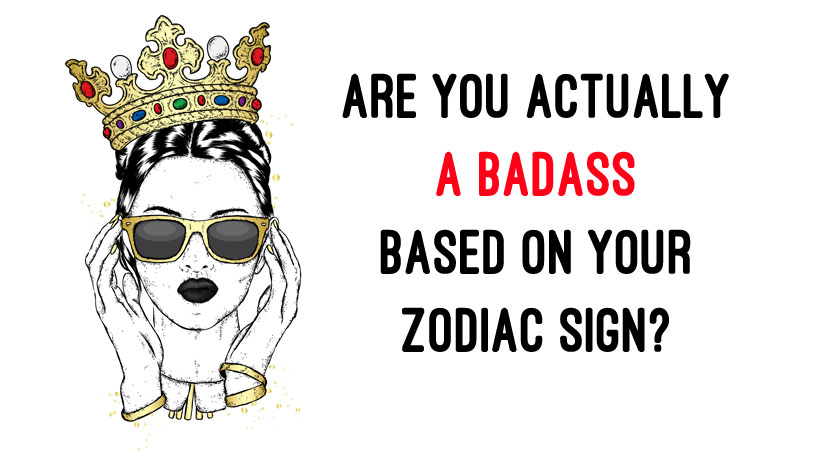 Nowadays, a lot of people want to be considered badasses. This term is used when someone exudes confidence in every aspect of their lives. Read below to find out if you exhibit this approach to life (according to your zodiac sign).

Aquarius (January 20th-February 18th)
Aquarius women are the definition of badass. People admire you because you’re as original as they come. Your independent nature leads you to follow your own set of rules blaze your own trails.

Pisces (February 19th-March 20th)
As a Pisces, you have a more gentle soul. You don’t really identify with this demeanor –  however, this doesn’t mean you’re not confident! When you need to, you’ll speak up for what you believe in, but you’ll do it in the nicest way possible.

Aries (March 21st-April 19th)
You are a natural born rebel. Aries women will do whatever it takes to succeed – so make sure you’re not standing in her way.

Taurus (April 20th-May 20th)
Taurus women don’t consider themselves to be badasses, though if you wrong a Taurus, she’ll immediately switch from being patient and calm to being stubborn and unforgiving.

Gemini (May 21st-June 20th)
Geminis are badass in the sense that they are always willing to step outside their comfort zone–– whether it’s by trying new things or meeting new people. They thrive off of excitement and novelty, and they aren’t afraid to be themselves to the fullest extent.

Cancer (June 21st-July 22nd)
Cancer women are more empathetic and sensitive – grit isn’t exactly in their nature. They will, however, defend their loved ones until the end of time because of how fiercely they care.

Leo (July 23rd-August 22nd)
Leos are a force to be reckoned with. Like a lion, Leo women are aggressive and proud. Everything you do is done with an air of confidence.

Virgo (August 23rd-September 22nd)
Virgos worry a lot about how they appear to other people, which is why their ability to go against the grain can be a little shaky. It would serve you well to practice reevaluating certain situations to see if they’re worth your energy.

Libra (September 23rd-October 22nd)
When it comes to fighting for what they believe in, Libras are extremely passionate. You aren’t afraid to hold your ground and defend your opinions –  and people look up to you because of this.

Scorpio (October 23rd-November 21st)
Scorpios are secretly badasses. Since they usually keep to themselves, you wouldn’t know it at first glance. As a Scorpio, you feel more and more comfortable with speaking your mind once you get to know a person – and you’re not afraid to let them know exactly how you feel.

Sagittarius (November 22nd-December 21st)
As a Sagittarius, you’re not one to conform to the majority, and you always do what your gut tells you to. Your free will and your endless search for excitement inspires many people to break away from the norm; you’re someone people want to model themselves after.

Capricorn (December 22nd-January 19th)
Capricorn women don’t care what people think about them. You march to the beat of your own drum – and you’re very secure enough in yourself and in your abilities.