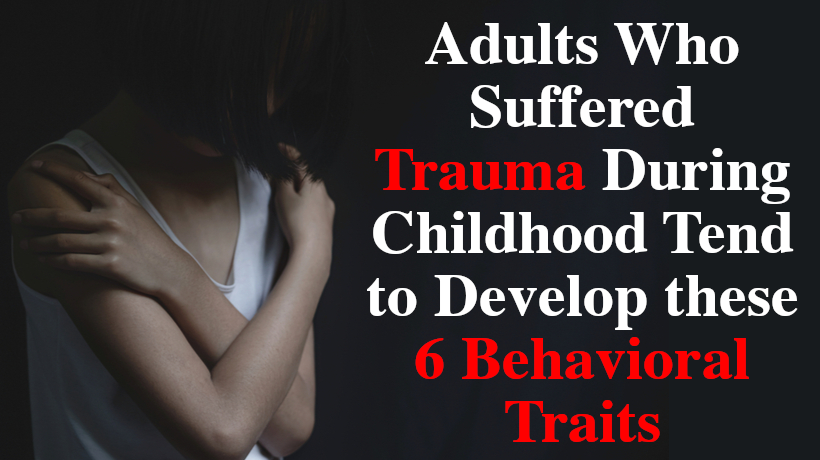 Trauma is a subject that is not fun to talk about, but necessary. For those of us who experienced a traumatic childhood at the expense of a relative or lack of mother or father figure, learning how to weave through daily life can be difficult. Without the comfort and love from a caretaker, we go through life on survival mode. Adults who suffered from a traumatic childhood tend to develop these five behavioral traits.

If you have been victimized as a child, you may continue to think like a victim. According to Andrea Brandt Ph.D. M.F.T., “the way we talk to ourselves can empower or disempower us. Negative self-talk disempowers us and makes us feel like we have no control over our lives.” This negative self-talk often leads to victim behavior within one’s own mind. While you may have been a victim as a child, as an adult you are able to control your environment better to avoid thinking of yourself as a victim. Brandt states, “Instead of thinking of ourselves as victims, we can think of ourselves as survivors. The next time you feel trapped and choice-less, remind yourself that you’re more capable and in control than you think.”

Depending on what kind of household you grew up in, you may be prone to passive-aggressive behavior. In a household where you are taught that anger is a bad emotion, you may be unable to express your true anger in a natural way, “even when it is beneficial [to the adult]” according to Brandt. Knowing that anger is a normal emotion and that it is okay to express it sometimes may help you to release some of that anger in a more straight forward way. But if you grew up in a household where anger was looked down upon, you may feel angry but express it in a passive-aggressive way, according to Brandt.

As a child, we may have, as Brandt puts it, “buried anger and fear in the hope that it would mean no one will ever abandon or neglect you again.” Childhood trauma teaches us to bury the bad parts of ourselves so we can be accepted and liked by others. However, when we bury the “bad” emotions, “we bury who we are.” Being true to your emotions and how you feel is a key aspect of healing as an adult with a traumatic childhood.

When we push down our feelings and emotions as a result of post-traumatic stress disorder, we tend to create anxiety within ourselves. One of the common symptoms of PTSD may include anxiety according to Dr. Todd Thatcher of the Highland Springs Clinic Organization.

When we experience something truly traumatic that shakes us to the core, our brains may unconsciously block out a part of the traumatic memory in an effort to protect the body. Darlene McLaughlin, psychiatrist, and MD said on Science Daily, “ if the brain registers an overwhelming trauma, then it can essentially block that memory in a process called dissociation — or detachment from reality. ‘The brain will attempt to protect itself.’” While emotion numbing may shut down the negative feelings that a PTSD victim doesn’t want to feel, it may also prevent the victim from feeling any joy, pleasure, or intimacy, among other things, Mayra Mendez, Ph.D., LMFT, a licensed psychotherapist and program coordinator at Providence Saint John’s Child and Family Development Center told Very Well Mind.

A PTSD victim may be prone to suffering from eating disorders as a way to fill the void of any numbness or anger they feel towards the event. A 2012 study mentioned on National Eating Disorders.com found that “the vast majority of women and men with anorexia nervosa (AN), bulimia nervosa (BN), and binge eating disorder (BED) reported a history of interpersonal trauma” (Mitchell et al. 2012).” The same study found that generally speaking, the rates of eating disorders were generally higher in people who experienced trauma and PTSD.