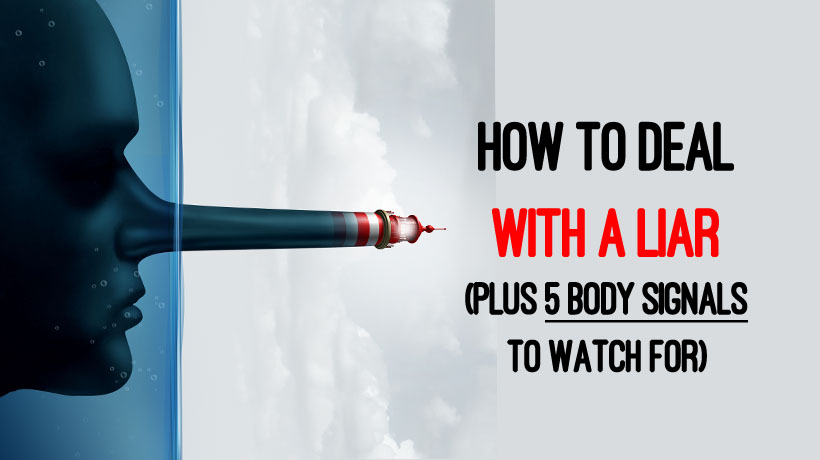 Have you ever had the gut-sense someone was lying to you but weren’t sure?  Or been fooled by a smooth talker? Or accused someone of lying, and later found out you were wrong?

Would it help you to know that while accomplished liars smoothly spin reasonable sounding stories, even practiced liars signal deceit with small nonverbal clues? They do. Our eyes often catch these clues without our brain registering exactly what we’ve seen.

If you’d like to train your eye and brain to consciously register these signals, you can detect a liar or a truth-teller.  Look for these classic clues:

The top and the bottom of the face don’t match
Have you ever seen someone smile with his mouth and not his eyes? Or frown with her mouth while her eyes sparkled with glee? Because a liar can more easily control his mouth’s shape than his eyes’ expression, a liar can force a smile or frown while his eyes tell a different story. Trust the eyes.

Sudden deadpan
When you next talk with a friend, notice her facial animation. Most people show a lot of facial animation until they want to guard what their thinking. A liar will suddenly adopt a “dead-pan” expression in an attempt to mask his feelings.

An abrupt shift
When two people talk, they unconsciously adopt similar body positions and styles of speech. You may have noticed you begin drawling when speaking with someone with a Southern accent or you instinctively smile or yawn when someone smiles at you or yawns in your presence. This unconscious, instinctive adopting of another’s nonverbal position creates a feeling of rapport. To break this feeling of rapport, a person planning to lie instinctively moves into a dissimilar body position. If someone’s body position abruptly shifts to a position different than yours just before answering a question, suspect a lie.

Up and to the left
Our eyes and other facial features move when we think of answers to a question. In general, a right-handed individual’s eyes flicker up and to the right when answering based on a remembered incident. When a right-handed person’s eyes move up and to his left, he’s visually “constructing” a picture of something new–potentially a lie.

Micro-expressions
When you ask a person a question and their face initially shows a reaction and then shifts into a different expression, the first, split-second reaction often tells the truth. When Arnold Schwarzenegger was asked about his sexual indiscretions at a press conference, his nostrils flared and then his mouth momentarily snarled. Within seconds, his face smoothed and he said he appreciated the question. If your eye hadn’t caught the micro-expressions, you might have been fooled by Schwarzenegger’s practiced delivery.

Finally, look for two or more clues
Any one clue, such as a deadpan face, may be simply a characteristic of that person.  The second clue confirms what the first clue hints.

While these clues may initially seem like “hocus pocus,” once you get the hang of interpreting nonverbal signals, a whole new world opens up. You can actually “watch” someone lie, gaining visual confirmation of your suspicions.

What can you do?

Trust yourself
The most important thing you can do when you’re up against a liar is to trust yourself. A liar makes you doubt yourself, turning you against you. Don’t let that happen.

Avoid reacting
Next, you’ll be tempted to react to their lies. Don’t let this happen, because when you react, you find yourself off balanced. Instead, stay calm and objective, and say what you know to be true.

The content is based on insights from different sources and express the views of the writer.