Breaking Barriers Through Courage and Conviction 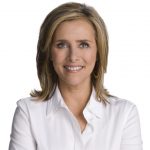 For many, Meredith Vieira is like a member of the family. She came into our living rooms as the host of “The View,” “The Today Show,” and now “Who Wants to Be a Millionaire” and as a contributor to “Dateline NBC.” With several Emmys under her belt, this talented journalist and TV personality not only deals with the issues head-on, but isn’t afraid to share her vulnerable side when it can help others.

A devoted wife and mother, with three children and a husband challenged by Multiple Sclerosis, she manages to volunteer on topics she cares deeply about; among them domestic violence and childhood obesity.

Childhood obesity is on the rise—and she cites the efforts of First Lady Michelle Obama, who has made “healthy choices” for young people a priority. Meredith confided about her pre-teen weight issue growing up in Providence, Rhode Island. “By the time I got to high school, I was okay,” she says, attributing part of the problem to body image concerns. “However, how you feel about your body never really goes away.”

Meredith has taken action towards improving school nutrition. She sent a letter to a former public school Chancellor for New York City urging healthier meal options in lunch lines. “It is no easy task—young people are bombarded by junk food ads…it is all around them and it’s easy to buy,” she explains. “The pre-teen years are complicated—kids may not know how to handle situations and look to foods for ‘comfort’. With support, they can learn to make different choices.”

Meredith has come to the aid of young adults for several years now. In 2005, she created a yearlong series called Meredith’s Club, where she helped a group of kids eat more balanced nutritious foods and exercise more regularly. “Obesity is a family concern…we need to educate families, too,” she shares.

Domestic violence is another issue Meredith feels passionate about, and also has personal experience with. In college, she was admittedly in an abusive relationship. “I think there is fear by many women who are being abused by their partner, that if they speak out, it will get much worse…we need to educate the men too,” she reflects. “It would be useful for male celebrities who have experience with abuse to step forward. However, it is much more complex than that.” She was a supporter of Telling Amy’s Story, a 2010 documentary that followed the life of Amy Homan McGee, a Pennsylvania wife and mother of two who was murdered by her husband.

Meredith continues to break barriers and make a difference in the lives of many Americans. When asked her take on news these days, she confessed that we need to cover it more thoroughly. “We can’t just cover the issue du jour—we need more follow up.” This is a strong woman with integrity that helps us all want to change for the better.

Learn more about one of Meredith’s causes

Childhood obesity is a condition where excess body fat negatively affects a child’s health or wellbeing.

Michelle Obama is a major advocate for healthier school lunches. She launched “Let’s Move,” an interactive community resource. Here are some action plans: