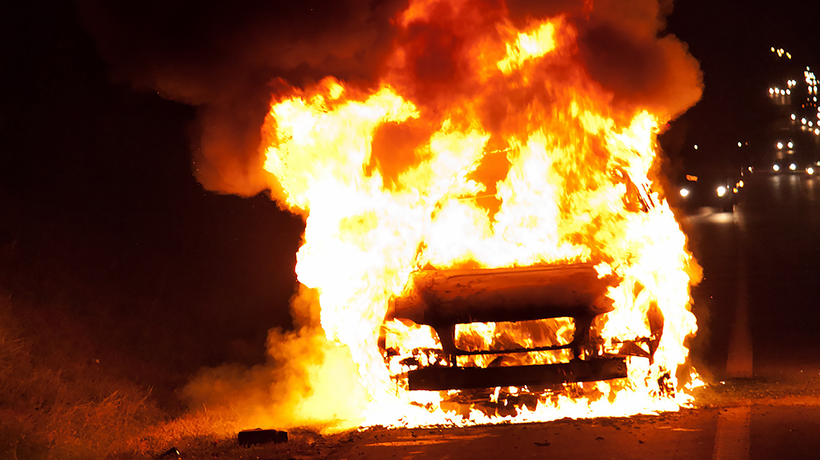 Featured image via Shutterstock and does not show actual scene. Image for representational purposes only.

The incident, which took place at 9pm the day after Christmas, occurred after their car “slammed into a toll booth,” according to PEOPLE.

The outlet reports that the deceased victims have been identified as 31-year-old Reachthon “Tonny” Khiev, who was driving the vehicle, his brother, 27-year-old Reachsieh “Johnny” Khiev, and their 14-year-old little sister, Keotepie “Keo” Khiev. A fourth passenger, the victims’ 12-year-old sister Michelle Khiev, was injured and taken to the hospital, but survived the crash.

New Jersey State Police told PEOPLE in a statement that Tonny was driving a Honda, which became “fully engulfed” in flames when it hit the toll booth on the Atlantic City Expressway. Authorities added that the toll’s attendant also sustained “moderate non-life-threatening injuries.”

Family friend Jimmy Giang told ABC affiliate WPVI that the two brothers, who were based in Manchester, New Hampshire and worked as “in-home aides for people with disabilities,” had gone home to Atlantic City to surprise their little sisters for Christmas.

“They were on their way back home to drop off their sisters from a day full of shopping and dinner,”  their sister Mimi Khiev — who was not in the car at the time of the crash —shared on GoFundMe. “Unfortunately, it was their best and last Christmas as a family.”

“Their caring nature not only translated through their career, but also through their endless kindness to everyone they encounter,” Mimi wrote. “They touched so many people’s lives and deserved so much more life than they got … They both had aspirations of opening up a donut shop and moving their whole family to live with them in New Hampshire.”

Mimi also penned a tribute to her late little sister Keo, describing her as a “beautiful, intelligent and very sweet girl.”

“Keo was the first Cambodian born American in the family of 9,” Mimi added. ‘She finished this marking period with high honors in hopes of maintaining a high G.P.A to be able to get a great scholarship and achieve her dreams of studying abroad in Paris.’

Mimi finished a GoFundMe update with a desperate plea.

“Life is too short so please hug your loved ones and don’t take them for granted,” she wrote. “In an instant, everything you have can disappear in a blink of an eye.”

Details on the cause of the crash are still under investigation.