The Pluck of the Irish 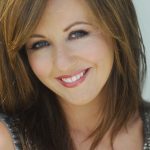 Lisa Kelly is not afraid to take risks. “Once I set my mind on something, I’ll do it, and if it doesn’t work, it doesn’t work. I’ll just do something else,” she declares. The confident singer was born into a theatrical family—her parents were performers, and she and her siblings were in shows growing up. Classically trained as a musician, she went on to become an ensemble member in amateur productions of Chicago, Chess, Oklahoma, and Grease.  To support herself, she took a 9-to-5 job as an applications consultant in the computer industry, b ut she gave up her steady paycheck in 1999 after being cast in a Christmas pantomime production at Dublin’s Gaiety Theatre.

In the aftermath of this risk, Lisa’s life underwent radical changes. “I took a break from office work for a year, and I just never went back,” she recalls. “The Christmas pantomime would be my first solid show, and it was going to last four months, so I just took a chance on it.” That performance led Lisa to a role as the lead vocalist in Riverdance. She started performing with the troupe two days after the end of her Christmas gig and spent four years touring with the company. Along the way, she met the man who would become her husband and the father of her three children.

In 2002, Lisa recorded a critically acclaimed solo album with music director David Downes. She decided to take a break from Riverdance when Downes approached her with an offer to join the female ensemble Celtic Woman. Originally envisioned as a one-night performance at Dublin’s Helix Theatre, Celtic Woman became a surprise success.  Today, the group’s recorded work sees sales in the millions, and they tour around the world.

“We didn’t expect that at all,” says Lisa. “Most of us agreed to do it because it was only going to be one night. We didn’t plan on this rapid success. It’s really been incredible. We haven’t stopped working since that first time together—it’s been go, go, go. And every year it seems to get bigger and better.” Celtic Woman has performed for three presidents, including President Obama. The group has also appeared on “Dancing with the Stars,” and earned numerous No. 1 spots on Billboard’s World Album chart.

As a mother of three young children, Lisa admits that juggling her musical career and her family responsibilities hasn’t been easy. In 2008, when Lisa was pregnant with her third child, she performed with Celtic Woman until her third trimester. “I was determined not to let the pregnancy change anything,” she remembers. “I was adamant, telling myself, ‘I can still move around the stage, I can still sing.’ It’s just tiring dragging the weight of your bump around.”

Nowadays, Lisa’s children often accompany her when she’s on the road. “When you have kids, your life revolves around them.  It’s really difficult to coordinate, but it’s all I’ve ever known,” she explains. “It takes a lot of organization—being a wife, a mother and working. I struggle with it at times, just like everyone else. You want to be the very best you can be. But it’s important not to be too hard on yourself.”

On her kids. I want them to grow up and be happy, and learn to respect other people. I try to be a role model, to show them that you have to work hard and that it’s great to love what you do.

On touring while pregnant. It was fascinating for the other girls in the group. I was the only one that had been pregnant.  They felt my bump at night—they wanted to know everything. They were so good to me.

On the group dynamic. People ask, “Do you get along?”  We don’t really fight over stuff. Everybody is professional, and we enjoy our work.

On her greatest challenge. I struggle with the guilt of not being there with the kids, awith wondering if what I’m doing is best for them. It’s hard, because I have to give myself 100 percent to the show at night, and then there’s a little bit left for the kids. It’s really tough sometimes.

On her marriage. My husband is the doer and I’m the decision-maker. We’re a great team, and we make it work.  We don’t have a major fear of trying new things. I believe that no matter what, we’ll be fine.