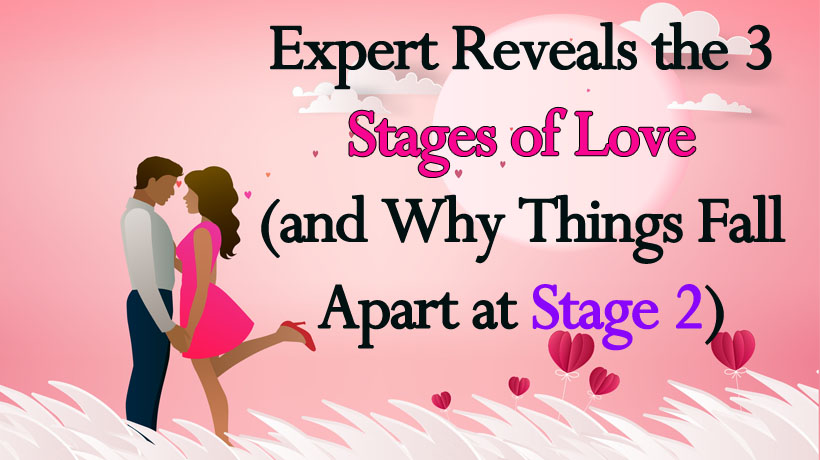 Loves brings a powerful rush of emotions that change a person’s world and perspectives. It can turn people into kinder, more empathetic, and attentive versions of themselves, but it doesn’t
always work out. Once a relationship reaches a certain point, arguments, heated fights, and break-ups happen. Why? Why does love go sour? To answer that question, we need to look at the three stages of love and how each stage affects the relationship.

Researcher John Gottman of The Gottman Institute reveals the fate of a relationship and more.

Stage 1: Falling in Love
The first stage of love has been coined the “Honeymoon Phase” or “Limerence,” which is, according to Gottman, “Characterized by physical symptoms (flushing, trembling, palpitations), excitement, intrusive thinking, obsession, fantasy, sexual excitement, and the fear of rejection.” We radiate joy with our significant other, wanting to be around them more.

We also won’t be able to resist touching them, whether by kissing, holding hands, or having sex. Our bodies produce amphetamine—a stimulant that speeds up messages between the brain and the body; oxytocin, the “cuddle hormone,” which makes us feel good when we touch someone we love; and pheromones. Combined, they make us drop our guards, enjoy the present, and allow us to get swept away in love. However, the euphoria, excitement, and comfort won’t last. Once the relationship reaches the second stage, trouble will brew.

Stage 2: Learning to Trust and Accept Flaws
The second stage deals with growing discontent in the relationship, which amounts to your typical arguments, withdrawal, and a loss of sappiness. The lovey-dovey symptoms of stage 1 fade, leaving behind regret, anger, disappointment, disillusionment, and pain. All flaws get a spotlight, and they become targets for antagonism. This is when most relationships break, because many people had viewed their significant other with rose-colored glasses. They realize the person they had doted on isn’t their ideal anymore, or their qualities don’t mesh with them anymore. This spurs fights.

However, the second stage isn’t always Armageddon for love. In fact, it can help relationships reach the next one if both partners remain positive in fights. Gottman states, “If the ratio of positivity to negativity exceeds 5:1 during conflict discussions, a couple is likely to stay together.” The most important things for couples to do to survive this phase is to be empathetic, to understand each other, to accept flaws, to compromise, to make a partner’s needs apparent, and to listen without judgement or toxicity. This will help build trust and bring a relationship to the final stage.

Stage 3: Committing and Being Loyal
The last stage of love brings the relationship to a steady, secure, and comfortable height where both partners are in tune with each other, they accept their shortcomings, and they’re eager to spend a life together. This doesn’t mean that the wild emotions from Limerence will reappear, but instead, the couple experiences a sense of feeling whole. They persevered by understanding each other, building trust, and being reliable, and their reward is to enjoy the relationship as it’s meant to be enjoyed. There is a balance of power between partners, which solidifies the connection and deepens trust. “It is very difficult to establish deep and lasting trust in a relationship that has an unwelcome power asymmetry,” says Gottman, “one in which the distribution of power feels unfair to at least one person.” However, couples who reach this stage will enjoy the balance of power that they gained from phase two.

Of course, break-ups can happen in this stage, but they are rare and usually don’t result from petty fights. In phase three, people have more successful marriages, and they raise children in a healthy family environment, taking comfort in their connection with their partners. It might not be as exciting or as emotionally charged as Limerence, but it’s stable and it lasts a lifetime.