Fake Apologies Used by Narcissists (Don't Fall for Them!) 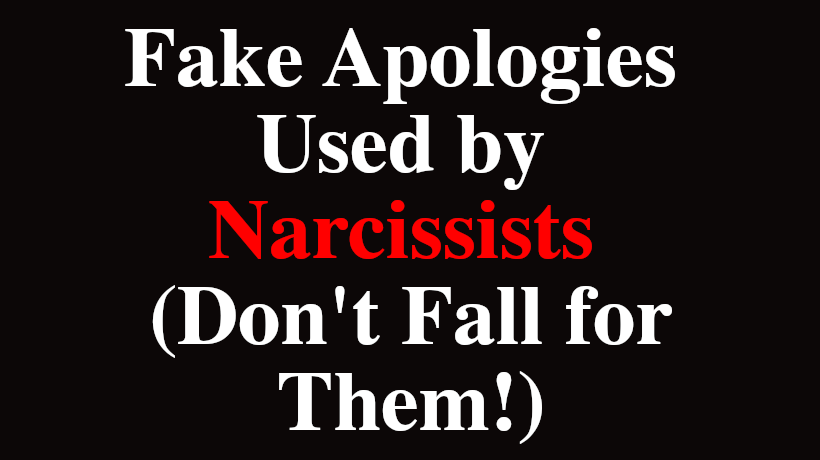 When we do something wrong, we apologize. To the average person, an apology is a statement to repair a relationship and to accept responsibility for what you have done wrong. However, when narcissists apologize, it is to continue the cycle of abuse, according to Sharie Stines, Psy.D. Below are a few fake apologies from a narcissist to be aware of so you don’t fall back into their abuse.

If a narcissist starts off their apology like this, do not believe the fake apology they are trying to throw your way. These kinds of “apologies” throw blame on you even if they were the ones who did something wrong. Some examples of these kinds of apologies are:

“I am sorry that you think I did something wrong.”

“I am sorry that you feel I am a bad person.”

“I am sorry, but maybe you’re just too sensitive.”

These kinds of apologies are labeled as “Nothing to apologize for” apologies by Dan Neuharth Ph.D., MFT. These apologies are used by narcissists when they want to try and talk you out of how you are feeling (your feelings are absolutely valid). Some examples include:

“You know I’d never hurt you.”

“You know I didn’t mean that.”

These fake apologies may have the word apology or apologize in them, but they seldom actually offer one. These types of statements are simply thoughts. Apology requires action.

“I guess I owe you an apology.”

“I guess I should say I am sorry.”

They never really say that they are sorry. They simply state that they guess they owe you an apology. As a result, this wording is meant to confuse you since they beat around the bush.

This apology is deemed as the one size fits all by Neuharth. The apology is rather vague and general about what hurt they have caused you. This is not considered a true apology because it does not indicate that the narcissist knows what they are saying sorry for. They may say this to “wipe the slate clean” as Neuharth puts it.

Coined as the “White-washing apology” Neuharth states, “Whitewashing apologies minimize any harm done by offering a self-effacing posture without owning up to the consequences.”

“I probably shouldn’t have done that.”

“Maybe I should have asked you first.”

Apologies should come on your own accord. By stating that someone else told them to apologize to you indirectly states that they didn’t come to that conclusion themselves and that they possibly don’t even mean it.

“Your mother told me to apologize to you.”

“My friend thinks I should tell you I am sorry.”

But what happens if they promise that things will change?

Even if you feel better after the apology, this is a common abuse tactic. By “apologizing” they show you that there is some good to the relationship. It’s not always going to be them messing around with the relationship.

As Sharie Stines, Psy.D. puts it “After the apology, you feel relieved and can relax again. This causes you to trust and bond with your loved one. This is all part of the creation of a trauma bond. Understand that trauma bonds form in toxic relationships and are harder to break than healthy bonds. Trauma bonds occur by inconsistent reinforcement.”

So what can I do?

Stines advises those who are in a narcissistic relationship, “it is important to exercise your cognitive “muscle” in this situation. You must do this in order to maintain your own sensibilities and peace of mind. This is far better than allowing yourself to fall prey to yet another narcissistic trap.”