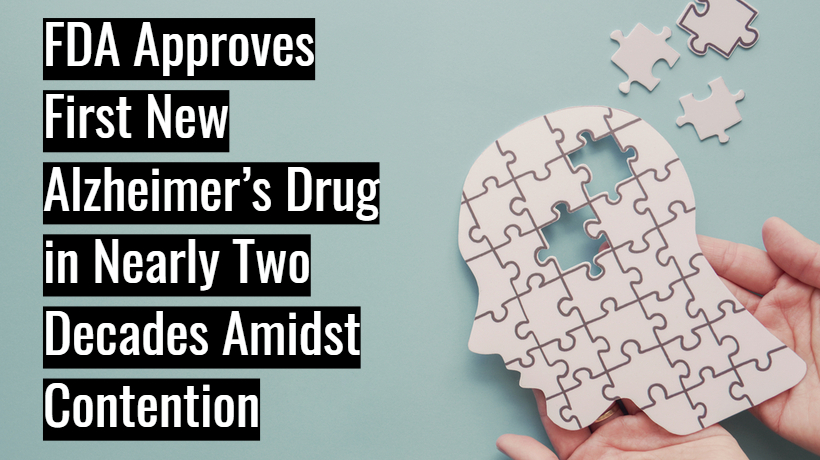 Amidst much controversy and debate, the FDA greenlighted the use of a new drug, Aduhelm (aducanumab), for treating patients with early onset Alzheimer’s. The new drug, manufactured by Biogen, is the first of its kind to be approved in 18 years, despite strong opposition from Alzheimer’s experts.

Currently, more than 6 million Americans are living with Alzheimer’s, and by 2050, experts predict that this number will increase to 50 million. During the pandemic, Alzheimer’s and dementia-related deaths grew by 16%.

In clinical trials, aducanumab appeared to show a 22% reduction in the development of thinking and memory problems associated with Alzheimer’s disease, according to the Alzheimer’s Association.

“Alzheimer’s disease is a devastating illness that can have a profound impact on the lives of people diagnosed with the disease as well as their loved ones,” said Patrizia Cavazzoni, M.D., director of the FDA’s Center for Drug Evaluation and Research in a press statement. “Currently available therapies only treat symptoms of the disease; this treatment option is the first therapy to target and affect the underlying disease process of Alzheimer’s.”

The FDA will now require Biogen to conduct a new clinical trial to verify the drug’s clinical benefit; if the trial fails to confirm aducanumab’s efficacy, the agency reserves the right to withdraw its approval. The agency also granted aducanumab an expedited development and review process, which is only reserved for drugs intended to treat serious medical conditions and fill an unmet medical need.

Many Alzheimer’s experts continue to voice their strong disagreement with the FDA’s decision, as many are still unconvinced of the drug’s efficacy. In early clinical trials, one study showed that Aduhelm treatment appeared to be associated with a decrease in Alzheimer’s-related decline, while the other did not. In October 2019, the drug’s manufacturer reversed course when it announced it would still seek approval of Aduhelm based on new data that was previously unavailable.

In November 2020, the FDA advisory committee overwhelmingly voted against the decision to approve the drug for treatment, citing a lack of evidence to justify the aducanumab’s efficacy.

“I simply don’t see a path for approval because of the absence of evidence that’s been shared to date that this product works, and I think it would set a remarkably dangerous precedent — not only for the field of Alzheimer’s research but also for the broader regulation of prescription drugs in our country,” Dr. G. Caleb Alexander, an FDA advisory committee member with the Johns Hopkins Bloomberg School of Public Health in Baltimore, told the New York Times.

Many are also concerned that aducanumab’s benefits do not outweigh the side effects. Common side effects for the drug include temporary brain swelling, which can cause headache, confusion, dizziness, vision changes, or nausea, and hypersensitivity.

“We are well-aware of the attention surrounding this approval,” the FDA wrote in a statement explaining the decision. “We understand that Aduhelm has garnered the attention of the press, the Alzheimer’s patient community, our elected officials, and other interested stakeholders. With a treatment for a serious, life-threatening disease in the balance, it makes sense that so many people were following the outcome of this review.”

“At the end of the day, we followed our usual course of action when making regulatory decisions in situations where the data are not straightforward,” the agency added.