For the First Time in History, Younger Women Are Getting Lung Cancer More Often Than Men 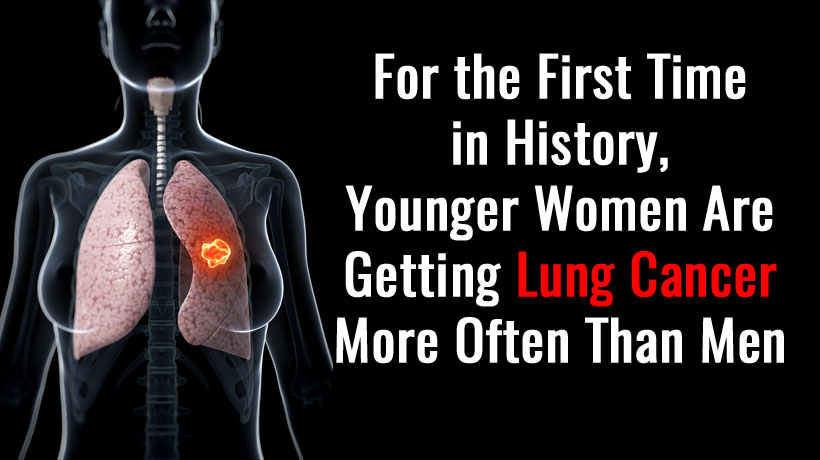 Recent research from the American Cancer Society and the National Cancer Institute has found that rates of lung cancer are higher in women than in men amongst white and Hispanic people born since 1965. The study was published on May 23rd in the New England Journal of Medicine. The results were surprising because historically, lung cancer rates have been higher in men than women.

Lung cancer is the leading cause of all cancer deaths in the United States, among both men and women. The cancer claims more lives each year than colon, prostate, ovarian and breast cancers do, all combined together. People who smoke have the greatest risk of lung cancer, although it can also develop in people who have never smoked.

Overall, throughout the past two decades, the cases of lung cancer have generally decreased in both men and women, ages 30 to 54 in all races and ethnicities. However, the declines in incidents among men have been steeper than in women. The result? Now, lung cancer rates are higher for white and Hispanic women born since the mid-1960s.

Previously, American women were less likely to smoke, started smoking at older ages, and went through fewer cigarettes each day than their male counterparts. They also have had lower rates of developing lung cancer. However, as time has passed, the smoking habits of men and women have grown increasingly similar. In fact, the prevalence of cigarette smoking among women born since 1965 has met, although not exceeded, the prevalence among men.

For example, rates of lung cancer among white women ages 40-44 from 1995 to 1999, which were on average 12 percent lower than men, are now 17 percent higher than men. Rates among Hispanic women showed a similar trend. Among black and Asian women, rates have grown closer, but have not exceeded, those of men.

But these reversed patterns cannot be fully explained by differences between the sexes in average smoking behaviors. Future studies will be necessary to identify the reasons for the higher number of lung cancer cases among young women in recent years.

For now, researchers speculate women may be more susceptible than men to the health hazards that come along with smoking cigarettes. Another possibility that medical professionals will be looking into in the future is that women may be more likely than men to get lung cancer, even once they have quit smoking.