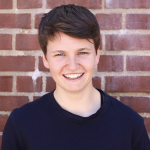 Growing up, Julia’s  father saw that she was full of determination and ambition. Julia says, “He didn’t tell me what to do with it, but he definitely saw that in me. He’s been a huge role model.”

While Julia grew up playing computer games, she didn’t discover her passion for computer science until her freshman year at Smith. “I declared my major right after finishing my first computer science course. I remember feeling like I was playing computer games instead of doing real school work.” Later as an intern at Google, Julia attended a women engineers conference. She was blown away by what she saw female computer engineers achieving. “It made me think, ‘I want more of that,’” she remembers.

As her interest in tech grew, Julia contacted Systers, a forum at the Anita Borg Institute, and asked for advice on how she could increase enrollment in STEM classes at college. Overwhelmingly they suggested starting a computer science group. “I loved the idea. Smith is a women’s college, so what better place to start producing these fantastic engineers? I created a FB group, invited my classmates, and off we went.”

The club was called Smithies in CS and hosted Smith’s first hackathon. A hackathon, Julia assures with a laugh, “is not related to any malicious intrusion of privacy, it’s about creativity and exploring amazing things with technology.” It’s not just free food and prizes. First time hackers are invited to learn how to code, and are already creating programs by the end. Julia reports that, “Hackathons are notorious for changing people’s lives and careers.”

Smith’s 2015 Hackathon reported that 88% of the attendees identified as female, and Julia’s happy to be part of an effort to close the gender gap in tech. When asked why this is so important, she says, “Inequality is never a good thing. When you’re creating technologies that are changing the world and 50% of people in the world are women, you would be producing much better tech if 50% of people involved in tech were also women.”

Between being a fulltime student, starting her own club, and planning the Hackathon, you would think Julia struggled with finding a balance—instead she excelled. “It was almost like having my own mini startup, and I really like that environment. I had a lot of phone calls to make and emails to write and documents to create, but it was totally a labor of love. I didn’t even notice that I was so busy.”

For girls out there who are interested in tech but don’t know how to get involved, Julia says the first step is checking out websites like code.org. She urges women to enroll in their local college’s technology course and not to be afraid to take the plunge. Julia believes that getting more women involved is key to future advances, and that an equal playing field will lead to better technology.

Where do you see technology going in the future?

One buzzword right now is the “Internet of things.” That refers to the fact that all of our gadgets and devices are becoming interconnected. So in the future I should be able to warm up my car from my smart phone, for example.

What advice would you give to your younger self?

Be as confident as possible. If you don’t feel confident, just fake it. The times that I’ve not done as well, I was usually doubting myself.

Are your parents involved with tech?

My dad learned Fortran in college and at one time would write code to model cellular process, as part of his early career in biotech. We love what tech can do today and like to imagine what tech might be able to do in 5-10 years. We’re always geeking out together.