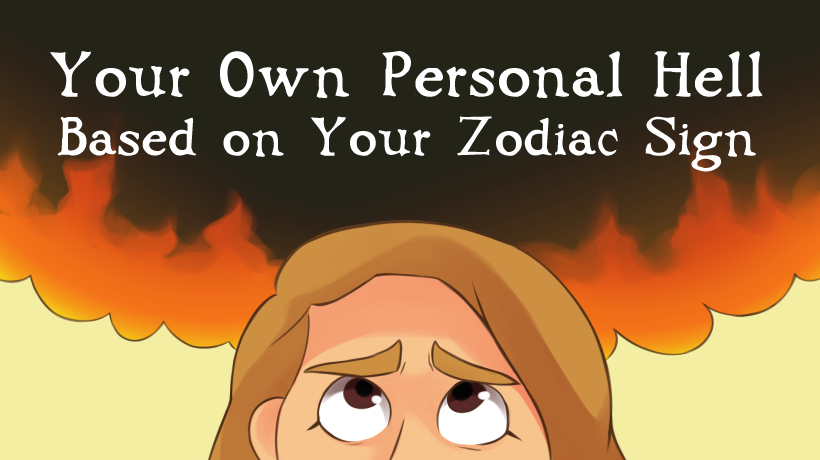 Those little annoying moments in your day that make you grind your teeth can really put a damper on your mood. Now, imagine how you would feel if the worst of those moments was on repeat . . . for eternity. That’s how we imagine what your own personal hell would be like.

Now, take a deep breath, check out our description of your personal hell, and try not to lose your sanity.

Taurus (April 20th-May 20th)
Tomorrow is moving day, and every time you think you have to load just one more box, you find another pile of stuff in a closet or under the bed that you need to sort and pack somewhere. To make it worse, you’re always missing just one part of the set you’re trying to pack, like a sock or the two of diamonds from a card deck.

Gemini (May 21st-June 20th)
You can see the “. . .” from someone texting you but they never send a message. Or worse: it goes away, meaning they deleted whatever they were typing.

Cancer (June 21st-July 22nd)
A toddler is kicking your seat on an airplane or in a movie theater and dribbling sticky soda into your lap. Every time you turn around to ask him to stop, he erupts a wail of indignation so loud your teeth hurt. Meanwhile, the toddler’s parent is asleep or in the bathroom.

Virgo (August 23rd-September 22nd)
Sluuurp. You’re stuck sitting next to someone who is loudly drinking or eating something with an odor so foul your eyes are watering. Any time you snap at them to maybe eat somewhere else, they call you rude and say they’re going to starve if they don’t eat now.

Libra (September 23rd-October 22nd)
You’re trapped in a waiting room where everything is just a little disheveled. The picture frame on the wall is slightly crooked; the person next to you is wearing a shirt with the buttons not lined up; and the receptionist has a little broccoli in between her teeth when she smiles.

Scorpio (October 23rd-November 21st)
You look forward to plans with your friend you haven’t seen in forever and you’ve been looking forward to it all week. You’ve done your hair, picked your best outfit, and put one foot outside the door when you get a text – it’s your friend bailing on you at the last minute again.

Sagittarius (November 22nd-December 21st)
There’s traffic backed up as far as the eye can see. It’s moving only barely enough that you have to keep your leg engaged on the brake instead of putting your car in park. What’s worse is you finally switch lanes because it seems to be moving faster only for it to stop and your original lane starts moving.

Capricorn (December 22nd-January 19th)
You’re standing in line for the better part of an hour and you’re nervous the place will close for the night. The man in front of you gets to the front of the line, the customer service representative asks how she can help him, and the man says, “Oh, ummmm . . . sorry, I’m not ready. Hold on.”

Aquarius (January 20th-February 18th)
You’re wearing headphones in public but people keep tapping you on the shoulder to get your attention, call you “sweetie,” and give you unsolicited advice about the way you look. Bonus points if they make a snide comment about how your generation is lazy and entitled.

Pisces (February 19th-March 20th)
Every time you are getting to the good part of a movie or video you’re watching online, the WiFi cuts out. When you can finally refresh the page, the video will only pre-load up to the part where it cut out.

Aries (March 21st-April 19th)
You’re at a restaurant with friends and you’re starving. The food arrives and you have to send your meal back because it was burned to a crisp. Everyone finishes eating, your entree finally arrives . . . and your friends help themselves to your fries without asking.