How Do You Respond to Heartbreak Based on Your Zodiac Sign? 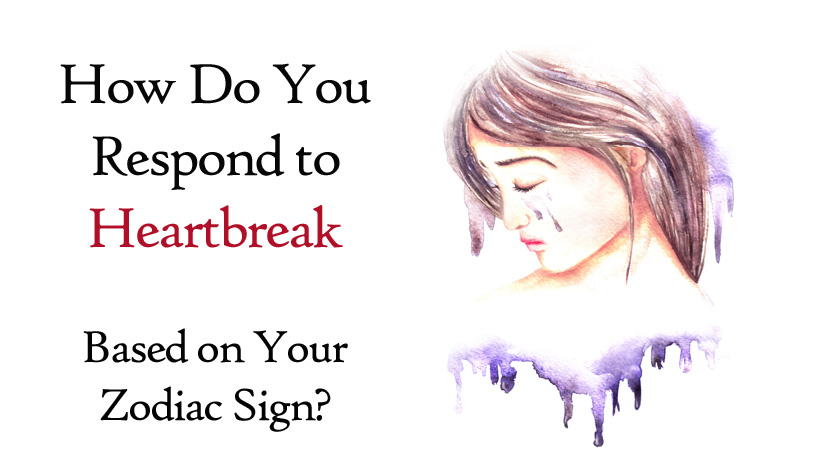 Breakups suck. Whether they surface out of nowhere or have been building up for a while, everyone has their own ways of coping with it. When dealing with heartbreak, here’s how you might react (based on your zodiac sign).

Aquarius (January 20th-February 18th)
Aquarius women know their worth. You are strong and independent. Because of this, you may not feel as deeply hurt after a breakup as some of the other signs – but that doesn’t mean it won’t sting a little.

Pisces (February 19th-March 20th)
As a Pisces, your sensitive and compassionate nature will reflect exactly how you’ll feel after a breakup. You’ll feel profoundly betrayed after a heartbreak, and you’ll surround yourself with plenty of loved ones to help you through it.

Aries (March 21st-April 19th)
Your sign feels most comfortable when in a position of power. Considering this, you might take heartbreak harshly because everything feels like it’s spiraling out of control. However, you’ll find a way to push through anyway; you are naturally headstrong and confident. Sometimes you tend to bottle up your emotions, but you should always remember that it’s OK to talk it through with someone you trust.

Taurus (April 20th-May 20th)
As a Taurus woman, you thrive when you have a sense of stability. Because of this, you aren’t too keen on sudden changes. After a breakup, it may take you some time to get used to being single again.

Gemini (May 21st-June 20th)
Geminis are notoriously proud people. After a breakup, this pride becomes a bit damaged. In order to build yourself back up again, you try not to think about the one who hurt you and instead concentrate on someone who’s worthy of your time.

Cancer (June 21st-July 22nd)
Cancers take heartbreak particularly hard. You are deeply emotional, caring and sensitive. When someone hurts you, you take it personally. You might draw back into your shell for awhile in order to let yourself heal – and that’s OK. Take as much time as you need, but never forget that you have people who care about you and will help you through this.

Leo (July 23rd-August 22nd)
As a Leo, you exude confidence. When someone hurts you, they hurt your ego as well. However, since you are prideful by nature, you’ll simply pick yourself up and keep on going until you find someone who’ll treat you like the queen you are.

Virgo (August 23rd-September 22nd)
Since you’re highly analytical, you might’ve already had an idea that something was up – and of course, you already have a plan in place to distract yourself from the pain if anything ever was. You take satisfaction in always being prepared. However, this doesn’t mean that you’re automatically fine (even with distractions).

Libra (September 23rd-October 22nd)
A breakup can unhinge your sense of balance. You also might carry a bit of a grudge afterward. Just know that they aren’t worth your energy, Libra.

Scorpio (October 23rd-November 21st)
As a Scorpio, you have issues with trusting people already. A heartbreak will only heighten your feelings of uncertainty and mistrust. It might take you a while to put yourself back out there.

Sagittarius (November 22nd-December 21st)
You are one of the most independent signs of the zodiac. A breakup is sure to sting, but it won’t last. You know deep down that the only person you need to make happy is you. After giving yourself a little time, you’re ready to dive head first into your next romantic adventure.

Capricorn (December 22nd-January 19th)
As a Capricorn, you are incredibly disciplined and hardworking. Because of this, you’ll view a breakup as a chance to better yourself and your future relationships.