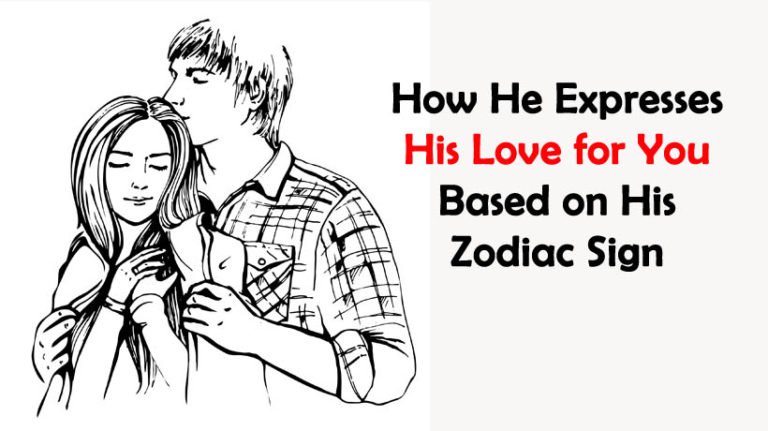 People have different ways of showing how they feel about their significant other. You’re used to seeing how you show your love for someone based on your zodiac sign … but what about how he expresses his love for you based on his?

Aquarius (January 20th-February 18th)
Aquarius men, just like Aquarius women, like to do their own thing. Aquarius men might appear aloof at times. However, if he truly loves you, you’ll bring out his tender and goofy sides – which is pretty impressive, seeing as he won’t show them to most people.

Pisces (February 19th-March 20th)
It’s pretty easy to tell if a Pisces man loves you. He will be utterly in awe of everything you do. Because of his compassionate and creative nature, he’ll find new and interesting ways each day to show you he loves you.

Aries (March 21st-April 19th)
Aries men can be a bit stubborn at times. They think that the only way to get where they want to be is to do it themselves. You’ll surely know if an Aries loves you if he includes you in his adventures and tells you his aspirations. It shows he trusts you with his deepest desires, which is something he won’t share with everyone he meets.

Taurus (April 20th-May 20th)
For Taurus men, change isn’t something they necessarily embrace. The mere fact that he’s taking this risk and opening himself up to you is a clear demonstration of his feelings for you. It means that you made him comfortable enough to accept this change.

Gemini (May 21st-June 20th)
The most telling sign of a Gemini man’s feelings is how well you hold his attention. Due to their social nature, they like to drift from person to person in search of new and exciting things. If his eyes never waver from yours and you capture his interest, you know you’ve got him.

Cancer (June 21st-July 22nd)
Like Cancer women, Cancer men are very emotionally open. They have no problem telling the world how they’re feeling. This may include plenty of public displays of affection.

Leo (July 23rd-August 22nd)
Leo men tend to show off. You’ll know that a Leo loves you because he’ll shower you with endless gifts and treat you like royalty.

Virgo (August 23rd-September 22nd)
Virgo men might not know how to come out and say that they love you right away. You’ll start to notice his true feelings in the little things he does. He’ll offer his help to you whenever you need it, whether it’s fixing something around the house or helping you work through a particularly difficult problem.

Libra (September 23rd-October 22nd)
You’ll know right away when a Libra loves you. When Libra men fall in love, they focus all of their energy on you. He’ll be sure to compliment you randomly throughout the day to remind you that he cares.

Scorpio (October 23rd-November 21st)
The love of a Scorpio is intense. They can have a hard time opening themselves up to others – but when they do, you’ll hold their heart in your hands. Scorpio men express their love by trusting you with their whole selves. Just make sure you don’t break this trust – it’s one of their deepest fears to have someone do so.

Sagittarius (November 22nd-December 21st)
A Sagittarius man will make you laugh until you cry; he knows that you’re his number one fan.  He shows you that he loves you by putting your happiness above everything else.

Capricorn (December 22nd-January 19th)
A Capricorn man is not superficial. He feels deeply, but is also highly rational. He might not express his love through little gifts, he’ll show you in his actions. Every single thing he does will be for your benefit.