How to Handle Receding Gums Naturally 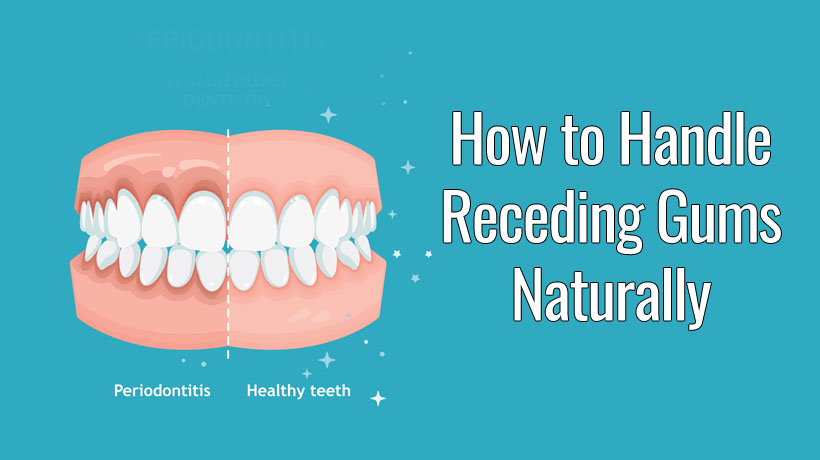 Unfortunately, receding gums are one of the most common dental conditions. It usually occurs due to periodontal disease, a bacterial infection that damages the tissues and bones that keep teeth in place. Receding gums can also be caused by hormone changes, especially in women, that can make gums more sensitive and prone to disease or infection. Additionally, genes, inadequate dental care or even excessive brushing could be the reason for disappearing gums. If you fear that you are experiencing gum recession, contact a healthcare professional. There are numerous treatments available to stop vanishing gums and help rebuild damaged tissues. Usually, this starts with deep cleaning and antibiotics performed and prescribed by a dentist, respectively. There are some natural ways, however, to try to bring back damaged gums at home. Here are some methods to try if you are experiencing gum recession.

Eat a balanced diet
‘You are what you eat’ isn’t just a popular saying; it’s the truth. A balanced diet can help provide the vitamins and minerals your body needs to maintain the tissue and bones that are impacted by gum recession. Incorporating more calcium-rich foods into your diet, like dairy and spinach could be key to repairing your damaged gums. Eating antioxidant-rich foods like berries and other fruits could ward off damaging bacteria that causes plaque, gum inflammation and infection that can worsen gum recession.

Oil pulling
As a popular fad, the benefits of oil pulling range from boosting your metabolism to clearing up your skin. One of these claims is the reversal of gum recession. A small study conducted by the Indian Journal of Dental Research found that swishing sesame oil in the mouth diminished gum inflammation and warded off harmful plaque.

Green tea
Drinking green tea has a host of benefits – most of them stemming from little things called catechins. Catechins are antioxidants that help cleanse the body of harmful substances. It is through the presence of these catechins that one study found green tea to combat periodontal disease. Catechins fight inflammation, aid bone resorption, and protects against some bacteria linked to periodontal diseases.

Aloe vera
Although a more unconventional approach, placing a small amount of aloe vera under the gums has been shown to reduce inflammation and defend against gum-destroying bacteria. Aloe vera is famed for its cooling properties, often used in the treatment of sunburns, and is thought to work in a similar way when it comes to inflammation of the gums. As with oil pulling, however, the conducted study exploring these effects had a relatively small sample size.