It Might Not Be Menopause: 7 Diseases with Similar Symptoms 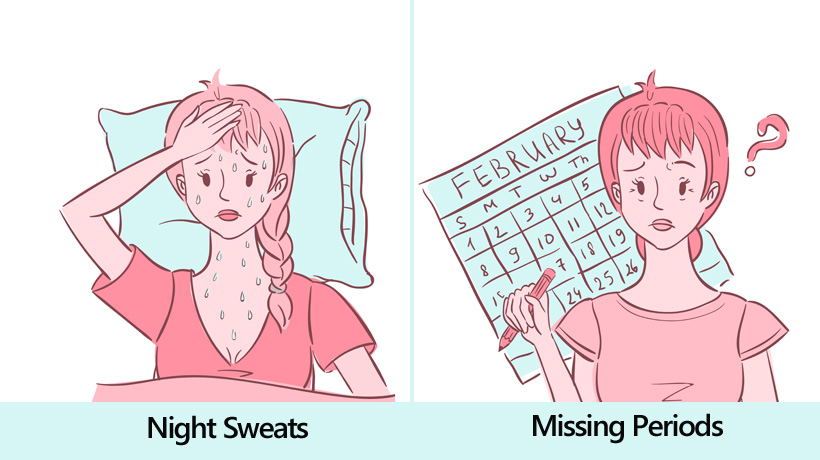 In ancient Greece, men believed that a woman’s uterus wandered around her body, causing problems wherever it landed. This gave birth to a diagnosis that was popular all the way up until the early 20th century: female hysteria. Hysteria is derived from the Greek word for uterus, hystera, and was considered an especially troubling medical diagnosis for women.

Though we’ve since evolved from that way of thinking, women are still being misdiagnosed by doctors. Often their symptoms are chalked up to changing hormones or menopause, causing doctors to sometimes miss conditions that become life-threatening if left untreated.

According to a 2016 study by the University of Leeds, women have a 50 percent higher chance of being misdiagnosed after a heart attack than men. A 2014 study published in the medical journal Diagnosis found that women are also 33 percent more likely to be misdiagnosed following a stroke.

Worried your “menopause” symptoms could be something else? Here are seven diseases that share some of the same symptoms as menopause.

Lyme disease
Lyme disease is a tick-borne illness that can become dangerous if it isn’t diagnosed. The most common signs of the disease are a rash with a bull’s eye pattern and flu-like symptoms such as fever or fatigue. However, Lyme disease can also cause extreme headaches, dilated pupils, and a quickening heartbeat – all symptoms that are associated with menopause.

Cardiovascular disease
As we already know, women are more likely than men to be misdiagnosed following a heart attack. Common symptoms include chest pain or discomfort, shortness of breath, and nausea. Symptoms that overlap with menopause include hot flashes, which can indicate an irregular heartbeat, and fatigue, which could be a sign of a partial blockage in the coronary artery. If you think your symptoms are being caused by cardiovascular disease, see your doctor immediately.

Thyroid problems
Women are five to eight times more likely than men to experience problems with their thyroid. The thyroid is a small, butterfly-shaped gland located in the neck that produces hormones that regulate your body’s metabolism. Hyperthyroidism occurs when the body produces too much hormone and hypothyroidism occurs when it doesn’t produce enough. Fatigue and night sweats are common symptoms of thyroid disorders that are often attributed to menopause.

Tuberculosis
Tuberculosis is a serious illness that mainly affects the lungs and is spread via the tiny droplets that are released into the air when you cough or sneeze. The disease is often resistant to drugs, and those with the condition must take several different types of medication over the course of many months to eliminate the infection. The illness has several symptoms, including coughing that lasts more than three weeks, coughing up blood, and chest pain. Symptoms that mirror menopause include night sweats and fatigue.

Uterine fibroids
While your doctor may attribute your irregular period to menopause, it’s possible that there’s a different gynecological issue going on. Uterine fibroids are noncancerous growths of the uterus that may cause discomfort and can lead to complications such as anemia, or a drop in red blood cells, due to an irregular period. Anemia may also cause fatigue, which can also be mistaken as a symptom of menopause.

Uterine cancer
In the worst case scenario of a misdiagnosis, uterine cancer can be mistaken for menopause. Both conditions bring about symptoms such as abnormal vaginal bleeding, pain during intercourse, and pelvic pain. If uterine cancer is the culprit, surgery to remove the uterus may be necessary, as well as chemotherapy or radiation. If you suspect your symptoms could be uterine cancer, visit a doctor immediately.