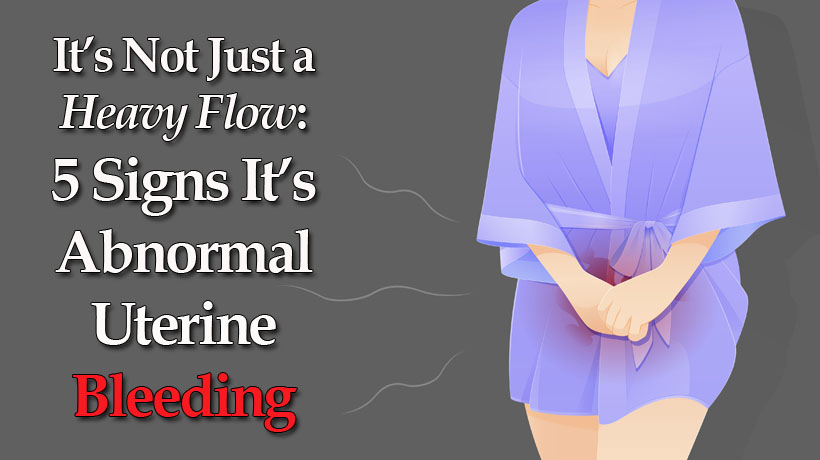 You know how this goes. You’re having a relaxing day, maybe lounging with friends and having a good time, when all of a sudden you feel it – that sensation of liquid slowly trickling its way out of your body and staining your brand new underwear. Congratulations! It’s a period.

According to the Centers for Disease Control and Prevention (CDC), menstrual periods typically last four to five days and only result in the loss of about two to three tablespoons of blood. If you’re a woman with a heavy period, those numbers are probably more laughable than the diaper-sized pads we’re forced to wear. But just how normal is a heavy flow? And how can you know when it’s something serious?

There can be several causes of AUB. One of the most common causes is structural abnormalities in the uterus. This can take the form of fibroids, or noncancerous growths in the uterine muscle. AUB can also be caused by polyps, which are another type of benign growth that can occur in the uterine lining. Bleeding disorders, platelet dysfunction, hormonal changes, or cysts in the ovaries (polycystic ovary syndrome, or PCOS) can also be the source of AUB.

Think you may be experiencing abnormal uterine bleeding, but can’t tell if it might just be a heavy flow? Here are five signs that the bleeding you’re experiencing is actually AUB.

You’re constantly changing your tampons or pads
The average woman will only have to change her tampon or pad every four hours. If you find yourself getting up in the middle of the night or running to the bathroom every hour to change your super-sized tampon and avoid leaking through your jeans, it could be AUB.

You pass blood clots
The occasional small clot in your period may not be cause for concern. But if you have excessive bleeding and often pass clots the size of a quarter or bigger, it could be a sign that you have AUB.

Your periods last longer than a week
Most periods usually last about four to five days. Those who experience abnormal uterine bleeding can have periods that last about 14 days on average. If your periods are longer than a Shake Shack line on a sunny Saturday afternoon, you may have AUB.

You’re exhausted when you have your period
If your periods are heavy and last longer than seven days, you could develop a condition called iron deficiency anemia, which occurs when there’s too little iron in the body. This is because iron is found in the blood and prolonged bleeding increases your risk for anemia. Anemia commonly results in fatigue, skin pallor, shortness of breath, light-headedness, dizziness, or a fast heartbeat.

Your period impacts your routine
The last sign of AUB is perhaps the most telling sign that something’s wrong. If your period is interfering with your daily routine and causing you to miss important things like work, school, or social events, it’s time to speak to a doctor. Normal periods shouldn’t greatly affect your day-to-day life.

If you recognize any of the symptoms above, or maybe even have a few more to add to the list, you should speak to your doctor about abnormal uterine bleeding. They may just have a solution that’ll take the stress out of getting your period!