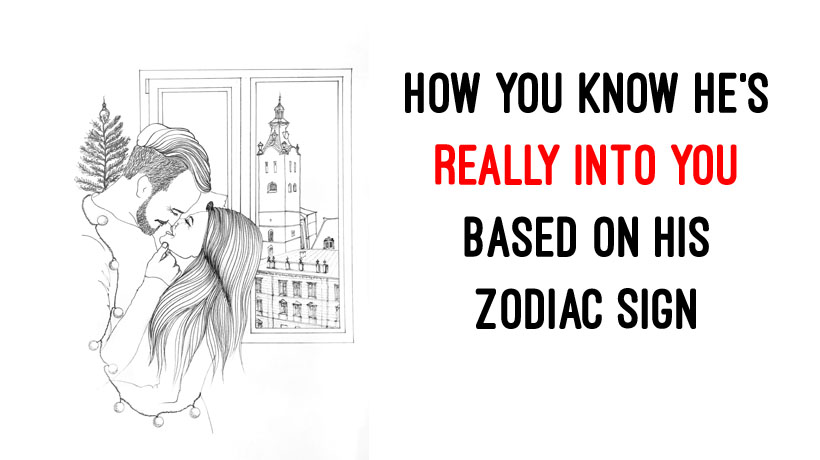 You should never waste your time on a guy who isn’t truly interested in making your relationship work. However, every guy has his own way of letting you know how he feels about you. This is what his zodiac sign suggests about his methods.

Aquarius (January 20th-February 18th):
While he won’t be shy about spilling his political views on the first date, you should really take notice of whether he reveals anything personal. Any window into his heart, big or small, is a sure sign that he really likes you.

Pisces (February 19th-March 20th):
If he’s a Pisces, he probably has a big regret or two from the past that keeps him up at night. He’s constantly worried that the mistakes he’s made will come back to hurt him. If he feels comfortable enough to share these fears with you, then he definitely sees a future with you too.

Aries (March 21st-April 19th):
If he likes you, he’ll just tell you. He’s extremely confident and won’t waste any precious time on someone who doesn’t feel the same way, and therefore the moment he catches feelings he will make it known. How convenient!

Taurus (April 20th-May 20th):
Because he’s devoted and fears any abrupt changes, he will make sure that you become part of his routine if he likes you. If he starts asking to see you on a regular basis, then you know you have become a steady part of his life that he does not want to risk losing.

Gemini (May 21st-June 20th):
You’ll know right away that he deems you worthy of his time if he quits with the small talk early on and goes straight for the personal questions. He doesn’t mean to be rude, he’s just genuinely interested and wants to know everything in order to be sure about you.

Cancer (June 21st-July 22nd):
He’s very emotional and loyal to the people he cares about. If he likes you, he’ll want you to know how much he values you. He’ll compliment you extensively, but never in an annoying way, and this will leave you feeling confident in yourself and his feelings.

Leo (July 23rd-August 22nd):
Showing off is a Leo’s way of telling you he wants to be with you. He needs you to think highly of him, and this proves his feelings because he’s clearly vulnerable around you. He needs you in his life, and the idea of being ignored by you drives him crazy.

Virgo (August 23rd-September 22nd):
A Virgo is extremely hardworking, almost to a fault at times. However, this makes it easy to know how much he likes you. If he makes room for you, he must really need you to be in his life to be willing to put some of his extra work aside for you.

Libra (September 23rd-October 22nd):
He’s probably already a social butterfly, and so if he blows off time with his friends, you know he’s really into you. The dates he has planned will melt your heart.

Scorpio (October 23rd-November 21st):
Pay close attention to your conversations, because if he breaks free of his inner Scorpio to expose some of his inner feelings with you then he must be invested in your relationship. Not only does this prove his trust for you, but it also shows that he’s willing to let his guard down for the sake of keeping you.

Sagittarius (November 22nd-December 21st):
This might seem simple, but if he spends a lot of time with you then he has caught some serious feelings. He hates feeling constrained in relationships, which means that every time he asks you to hang out he’s truly craving your company. Don’t underestimate the simple things with a Sagittarius.

Capricorn (December 22nd-January 19th):
He probably won’t come right out and tell you how he feels, at least not for a long time. He’s very calculated with his emotions, but this doesn’t mean he won’t drop hints. Any indications that he trusts you and expects the best from you means a lot for him, so if he’s worth it you have to do a little extra work to uncover his feelings.