Laughing in the Spotlight 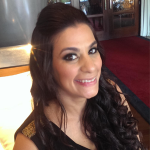 Some people are thrown off track by limitations, but Maysoon Zayid isn’t one of them. This strong woman has dealt with hardships, such as cerebral palsy and the discrimination that can come from being of Arab descent in the US, but she’s never let anything stop her from chasing her dreams.

Growing up with a disability, no one expected she would learn to walk—but her father had other ideas. When she was five, he placed her heels on his feet and would walk with her until she learned to go solo. “I felt motivated, I felt cheered on,” Maysoon says. “It’s taught me that degrading or yelling at people will never make them achieve. It’s cheering them on, encouraging them, and empowering them that facilitates change.”

Since childhood, Oprah Winfrey has been one of her idols. “As someone who always dreamt of being on television as an actress, I identified with Oprah because she was visible when nobody wanted a heavyset, African American girl with an afro on TV.”

Unfortunately, after auditioning for several parts she realized that casting directors couldn’t get past her disability. With guidance from her acting coach, Maysoon reflected and realized she had similarities to comedians like Rosie O’Donnell, Ellen DeGeneres, and Carol Burnett. She found her new path. “When you’re not the media’s idea of perfect, the way to get in is through comedy.” Maysoon is said to have been the first standup comedian in the Arab world.

“I am a female who performed uncovered and uncensored in the Middle East. It’s interesting to me that I feel more free doing comedy in the Middle East than I do in the US. I don’t think we’re as free to express ourselves here as I am there. If you make one bad joke, you could lose your livelihood.”

While Maysoon has enjoyed a successful career, she’s also experienced extreme prejudice. Since September 11, 2001 many Muslims in America have been unjustly discriminated against, including her. “I’ve been shut out of jobs. I’m terrified by people who have a deep hatred for Muslims.”

To combat the negative images of Arabs in the media she and her business partner, Dean Obeidallah, started the New York Arab American Comedy Festival. “People didn’t realize that not all Arabs were Muslim, so it was important for us and the festival to have comics that were Christian, Muslim, Jewish, Buddhist, Atheist, and Mormon to show that an Arab can be anything.”

She hasn’t stopped there. Maysoon had the number one TED Talk of 2014, is a prolific writer, and works hard to widen exposure for the disabled in media. She also runs Maysoon’s Kids, a charity for wounded and disabled refugee children. In five years, she sees herself co-hosting a big morning talk show. And in ten years? Having her own.

Jerusalem. Hands down, no competition. It’s my home. That’s where I consider myself to be from. My dad is buried there, so that’s big for me. It’s magical; it’s a place where you feel like you’re stepping into an entire different time in history. It’s very serene and physically beautiful.

This question used to be easy, because I would always say Gone with the Wind. Today I’d say Amy Poehler’s Yes Please.