How You Light up a Room Based on Your Zodiac Sign 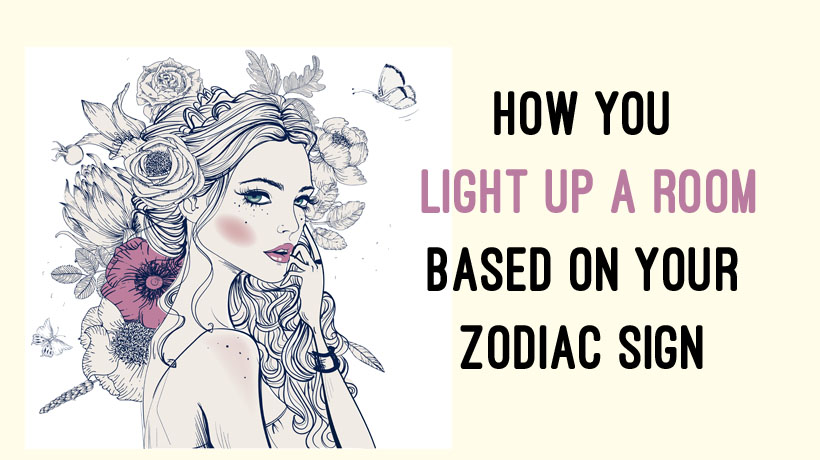 It’s not always about wearing the right outfit to get attention, sometimes it’s all about what you already have. According to your zodiac sign, this is the trait that truly stands out to everyone around you.

Aquarius (January 20th-February 18th):
People love anticipating what they can expect from you next, as your originality and independence make you a wild card. You always come prepared with new theories and opinions to engage everyone around you.

Pisces (February 19th-March 20th):
Your creativity makes you the ideal romantic, and people seriously admire your level of compassion. You fill the room with your creative ideas and it’s impossible to not take notice, especially when you’re passionate about something (or someone).

Aries (March 21st-April 19th):
The way you stay loyal to everyone and everything you believe in is undeniably attractive because it reveals your fiery spirit. People know that they can count on you to protect them, and who doesn’t love a protector?

Taurus (April 20th-May 20th):
You refuse to give up, and this always draws people to you. You’re extremely dedicated to everything that you deem important, which means that you build meaningful connections with those around you that last forever.

Gemini (May 21st-June 20th):
When you enter a room, people take notice because you’re known as the life of the party. You’re spontaneous and you won’t take no for an answer, not if it deprives you of any fun! You thrive on trying new things, and people want to follow your lead.

Cancer (June 21st-July 22nd):
You never shy away from your emotions, which lets others know that you’re affectionate and sweet. People want to be around you to soak up your romantic energy, especially because they know that you’re the best listener.

Leo (July 23rd-August 22nd):
You have a reputation for having high standards and great taste, which never fails to light up a room because people are just taken aback by you. You’re the best dressed with a sexy attitude to match, and everyone wants to be you or be with you.

Virgo (August 23rd-September 22nd):
You’re the root of intellectual stimulation at any gathering, and people sometimes just won’t leave you alone. Everyone wants to pick your brain and learn from you because you’re smart and patience with your opinions.

Libra (September 23rd-October 22nd):
You light up any room with justice in a way that lets others know how much you care. You want the best for everyone, even strangers, and this makes you very popular. People really admire your unbiased attitude, and they cherish your approach to life.

Scorpio (October 23rd-November 21st):
Everyone knows that a healthy serving of wit is very sexy, which is why your way of reading people is spot on. You know how to make every joke a little bit dark, and very humorous in a way that holds everybody’s attention.

Sagittarius (November 22nd-December 21st):
You’re adventurous with an alluring smile, and who could turn that down? You’ll have any room glowing with your presence, mostly because people know that you bring true spirit to any gathering. Everyone loves a spontaneous soul.

Capricorn (December 22nd-January 19th):
People love that they know not to mess with you. You’re strong, smart and you always know how to get what you want. However, you’re also humble about your success, and this makes you all the more admirable.