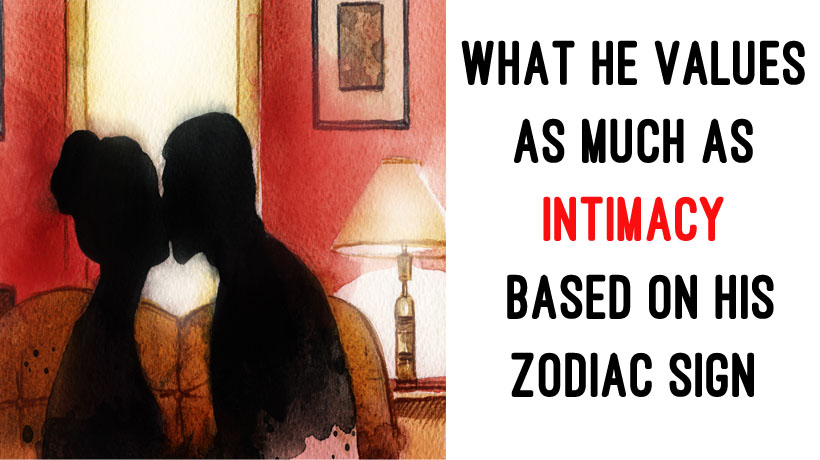 You might think that all men want one thing out of a relationship – but for all men, this one thing isn’t the same. Here is what he really values in a woman (even more than intimacy) according to his zodiac sign.

Aquarius (January 20th-February 18th)
Independence is what an Aquarius man values more than anything. He looks for a woman who respects his boundaries, and he knows to do the same for her. While he understands that couples do most things together, he prefers to be alone (or at least have the freedom to retreat).

Pisces (February 19th-March 20th)
This type of man values kindness over everything. He looks for a woman who is in tune with her own emotions as well as those of the people around her. He wants to be with someone who is just as compassionate as he is.

Aries (March 21st-April 19th)
Aries men value passion – a passion for life. They are highly attracted to women who are driven enough to want success, but who also care deeply about what they’re doing.

Taurus (April 20th-May 20th)
A Taurus man values honesty above anything else. He needs to feel secure with his partner, as the thing that most Taureans thrive on is stability.

Gemini (May 21st-June 20th)
Gemini men value a woman who can find a balance between wanting to have a good time and knowing when to buckle down – something that Gemini men have difficulty doing for themselves. They need a woman who can help them find this moderation.

Cancer (June 21st-July 22nd)
If you love a Cancer man, you know that he feels everything deeply.  This type of man needs someone to lean on – someone he feels comfortable enough opening up to.

Leo (July 23rd-August 22nd)
Leo men are notorious for having warm hearts. They’re also known for being fiercely loyal; that’s why they value a welcoming, trustworthy woman above all else.

Virgo (August 23rd-September 22nd)
Virgos look for level-headed women. They need someone who sees the value in thinking rationally but also a little bit idealistic (just to balance them out).

Libra (September 23rd-October 22nd)
This type of man values intelligence and diplomacy. He wants a woman who is able to see both sides of a situation and use reason to come to some sort of compromise, whether this is inside or outside of the relationship.

Scorpio (October 23rd-November 21st)
Scorpio men value trust above all else. They need to feel secure with their partner so that they feel like they can be themselves fully – and this always comes before intimacy.

Sagittarius (November 22nd-December 21st)
Just like Sagittarius women, Sagittarius men need a partner who has a very open mind. They appreciate it when a woman is accepting and willing to explore new things.

Capricorn (December 22nd-January 19th)
Capricorn men are driven and hard-working. Even more than intimacy, they value a motivated woman – one who has goals and actively tries to pursue them.