Why Men Zone out When We Talk to Them 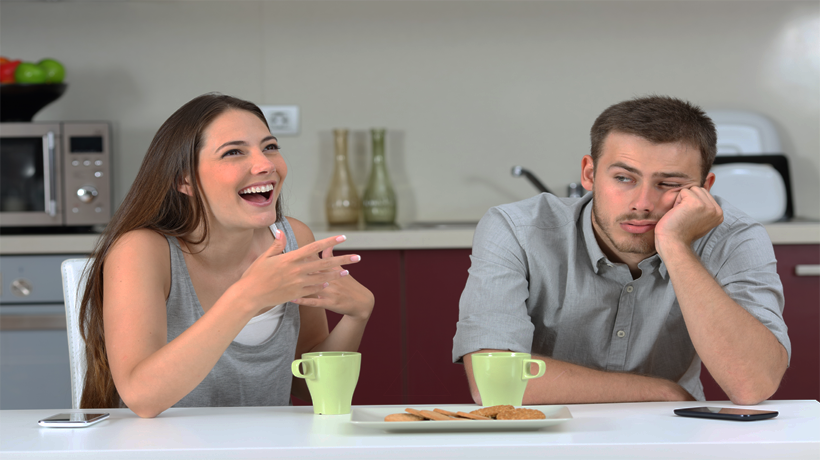 Modern humans are easily distracted. Considering the amount of entertainment, advertising and social media we live with, it comes as no surprise. Our phones alert us all day and night. Writers have to shorten sentences and paragraphs to keep people’s attention.
Then, there’s the particular lack of focus when men seem to zone out while women are talking to them. What’s that all about? Let’s see if we can get to the bottom of it.

Kids listen better than adults
In an article from Scientific American, Professor Ralph Nichols discovered that first and second graders paid better attention to their teachers than anyone older than them. In fact, the older the students got, the less attention they paid. This shows that listening comprehension deteriorates as we grow older, regardless of gender, even though we think we’re comprehending better.

Women listen better than men
Scientific American also ran their own informal study where 1000 men and women watched the same videos about painting a room, voting and reading a privacy policy. They were then asked 15 questions about the material. In a cross section of Americans, women answered 66% of the questions correctly. Men answered 49%.

Men have low tolerance for talking
In Scot Ferrell’s book, “What Men Don’t Get About Women”, he presents a good scenario in which a group of friends meet to catch up on things. One member of the group reports that they lost their job.
If the group is male, the men are going to rally around their jobless companion to solve the problem. They’ll compile contacts, work on resumes, find companies that are hiring, etc.—all within a span of about 10-15 minutes.
If the group is female (Ferrell asked his wife for an expert perspective), the friends would rally around their jobless sister and find out how she’s feeling, get the details of what happened, how this would affect home life and talk it out – a lot.
There is a big clue here as to why men get distracted while women are talking. Men just have a lower tolerance for it. Once the details are hashed out and the solutions to an issue presented, there’s nothing left to say.

Why do women talk more than men?
Generally speaking, society frowns on quiet women, assuming they are “homebodies” or introverted. If you put stock in John Gray’s “Men are From Mars, Women are From Venus” book, then you might accept the idea that women talk more than men because they don’t feel heard by men. In feeling unheard, a woman may feel unloved.
I think this begins with the understanding that women are biologically more social than men. By being social, they learn about their environment – which is key to protecting their children. Men, on the other hand, live in caves (thus the idea of the “man cave”) where issues are straightforward and they know how to fix things.

Why men get distracted and stop listening
We’ve learned that men listen less than women and talk less than women—or at least they talk about very different things. In very general terms, women have emotional and empathic intelligence, while men are problem solvers.
Once a woman starts drifting away from the details necessary to solve a problem, men begin to tune out. Also, when women begin expressing their feelings, men conclude this is not a productive way to fix things, and (again) tune out. As they tune out, the mind finds something else to think about. “Like what?” you ask. That’s a whole other story.